Man arrested in the Netherlands after gun attack on Saudi embassy 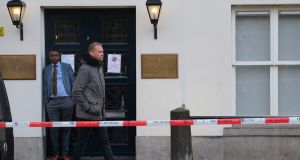 Bullet holes are seen in the windows of Saudi Arabia’s embassy in The Hague on Thursday. Photograph: Mike Corder/AP

A man is in custody in the Netherlands after an attacker fired almost two dozen shots at the Saudi Arabian embassy in The Hague on Thursday morning – escaping on foot before armed paramilitary police arrived on the scene.

Nobody was hurt in the attack, which happened at about 6am, when the embassy offices on Koninginnegracht, an affluent area in the heart of the city just a few kilometres from the parliament, were in darkness and apparently empty.

Bullet casings littering the footpath afterwards indicate that the gunman fired from just across the street, peppering the front of the building with as many as 20 shots and leaving the facade and front windows dotted with bullet holes.

As dawn broke, forensic teams sealed off and searched the street, and officers from the special diplomatic protection service spoke to embassy officials to discuss security arrangements and to see if they could help establish who may have been responsible.

Some local people said they thought the noise was fireworks.

Tests are being carried out on the bullet casings, but a police spokesperson said it was too early to say what type of weapon was used.

The Dutch domestic intelligence service, AIVD, would normally join the investigation because of the possibility of terrorist links.

The Saudi embassy condemned the attack, praised the prompt response of the Dutch authorities, and said it was “looking forward to bringing those responsible to justice”. It also urged its citizens in the Netherlands to remain cautious.

The official Saudi Press Agency described the attack as “a cowardly shooting incident”.

The Dutch foreign ministry said it was taking the shooting “extremely seriously”.

Although there is no indication yet as to the motive, diplomatic sources pointed out that it came just hours after a bomb attack on westerners attending a Remembrance Day service in the Saudi city of Jeddah, in which at least three people were injured.

The commemoration, hosted by French diplomats in a cemetery for non-Muslims, was attended by staff from the American, British, Greek and Italian consulates and the improvised device is believed to have been thrown over a wall into the group.

France, in particular, has also been on alert following President Emmanuel Macron’s defence of freedom of speech after the beheading of a school teacher last month. Dutch prime minister Mark Rutte has voiced strong support for Mr Macron.

If a link is established between the attack in The Hague and the Jeddah bomb, then diplomatic security is likely to be stepped up in cities right across Europe.

The man arrested in connection with the shooting was detained in Zoetermeer, about 15km from The Hague, on Thursday evening.