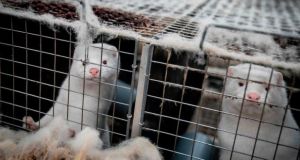 Mink look out from their cage at a farm near Naestved, Denmark. Photograph: Mads Claus Rasmussen/Ritzau Scanpix/AFP via Getty Images

New variants of Covid-19 that have emerged from mink farms are more resistant to antibodies and risk jeopardising the effectiveness of vaccines for the disease now under development, the European Centre for Disease Prevention and Control has warned.

Infected minks could also become a “virus reservoir” that could introduce new diseases into the human population in the future, the EU agency said.

It urged national authorities in the EU and Britain to increase testing and infection control around mink farms to “decrease the risk posed to public health”.

Humans can spread Covid-19 to minks and vice versa, and the virus can mutate more quickly in minks before being spread back into the human population.

Last week Denmark reported it had found 214 cases of Covid-19 infections of a variant related to mink, as well as infected mink on a number of mink farms. In August and September, 12 cases were reported in humans, not all of whom had a direct link to a mink farm.

There have also been outbreaks in mink farms in the Netherlands, Spain, Sweden, Italy and the United States.

“When the virus is introduced into a mink farm, it can spread quickly leading to many cases among minks. Due to the large number of infections and possibly due to biological differences between minks and humans, the virus can accumulate mutations more quickly in minks and spread back into the human population,” the agency said.

“If these new SARS-CoV-2 variants, with lower susceptibility to neutralising antibodies, spread widely in the population it could potentially affect the level of overall effectiveness of vaccines under development, and the establishment of a virus reservoir among minks may give rise to problematic virus variants in the future.”

The agency recommended that national authorities should include the potential for animal infections in their planning for how to combat the virus, while introducing infection prevention and control measures for mink farm workers and visitors, animal testing and the prevention of spread from animals to humans.

In addition, it recommended the testing of mink farm workers and communities, sequencing and study of the properties and infectivity of the new variants.

The first phase of testing has concluded on workers at three Irish mink farms and on their household contacts, HSE chief executive Paul Reid confirmed at a briefing on Thursday. It plans to continue testing on a weekly basis.

The animals are being tested by the Department of Agriculture which said it has been monitoring the evolution of SARS-CoV-2 in animals since the beginning of the pandemic and has maintained contact with fur farmers since early summer.

“There has not been any suspicion of disease in Irish mink farms to date,” a spokesman said.

“[Ongoing] surveillance is being carried out to determine if the virus is present and if so, whether the mutation is present.”