The speaker of the House of Commons John Bercow has announced that he is to stand down as speaker and as an MP at the end of the current parliament, Bercow has served as speaker since June 2009. Video: UK Parliament TV 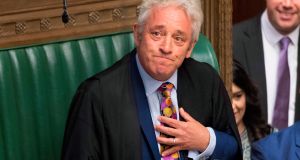 Speaker of the House of Commons John Bercow: has been described as a “stupid, sanctimonious dwarf” and “one of the great speakers”. Photograph: Jessica Taylor/UK Parliament/AFP

With his announcement that he will stand down as speaker by October 31st, John Bercow is ending a House of Commons career that has seen him move from the right of the Tory party to become a darling of Labour MPs.

Standing at 5ft 6in, Bercow has become a favourite of satirists, developing a cult following abroad for his thunderous voice and the theatrical way he shouts “order”. He has variously been described as a “stupid, sanctimonious dwarf” (Conservative MP Simon Burns) to “one of the great speakers” (Tom Watson, deputy leader of the Labour Party).

Bercow was born in 1963 in Edgware to Jewish parents. His father was a taxi driver and he attended Finchley Manorhill comprehensive school in North Finchley before going to Essex University to study government.

At university he was a member of the far-right Conservative pressure group the Monday Club and secretary of its Immigration and Repatriation Committee. He had left the group by the age of 20 and has since described his views at the time as “bone-headed”. (He later led calls for Conservative MPs to be banned from being members of the group.)

Bercow graduated with first-class honours and worked in banking before entering politics – first as a councillor in Lambeth and then as a special adviser to chief secretary to the treasury Jonathan Aitken. After standing for parliament twice unsuccessfully, Bercow was finally elected a Conservative MP for Buckingham in 1997.

He joined the Tory front bench two years later as a spokesman for education and employment under Theresa May and later a spokesman for home affairs under Ann Widdecombe. He arrived in the shadow cabinet in 2001 when Tory leader Iain Duncan Smith made him shadow chief secretary to the treasury.

Around the early 2000s, Bercow’s politics began to become more socially liberal. In 2002 he married his wife, Sally Illman, a Labour supporter, who stood to be a Labour councillor in Westminster in 2010. The same year as his marriage, Bercow resigned from the front bench after rebelling to vote for Labour plans to allow unmarried gay and heterosexual couples to adopt children.

He told his constituency association in his new year’s message that year that voters saw the Tories as “racist, sexist, homophobic and anti-youth”.

Bercow was elected as speaker of the House of Commons in 2009 and quickly provoked accusations of anti-Tory bias. In 2011, the Conservative MP Rob Wilson calculated that Conservatives had been slapped down by Bercow 257 times, compared with 107 for Labour since the 2010 election.

Ahead of the 2015 general election, Bercow was applauded by Labour MPs in the House of Commons after he survived an attempt by his own party to oust him. A motion for there to be a secret ballot to reselect a speaker when parliament returned, tabled by then leader of the House of Commons, William Hague, was defeated by 228 to 202.

Despite Bercow’s historic Euroscepticism – he has been a supporter of the Bruges Group – allegations of bias quickly turned to accusations of wilful obstruction following the Brexit vote. In 2017, the Sunday Telegraph reported he had admitted to students that he voted to remain in the EU referendum, though Bercow insisted he would stay “scrupulous in ensuring that both sides of the argument are always heard”.

The speaker was accused of being “hugely political and out of line” when he said Donald Trump was unfit to address MPs in Westminster because the House of Commons was opposed to “racism and to sexism and our support for equality before the law and an independent judiciary”.

Bercow’s decisions have been key obstacles to Conservative government attempts to push through Brexit. In March this year, Bercow pre-empted an attempt by Theresa May to bring a third vote on her withdrawal deal to parliament, citing a convention which dates back to 1604 which says a vote on a motion that is “substantially the same” as a rejected motion should not be permitted. Last month, he described Boris Johnson’s decision to prorogue parliament as a “constitutional outrage”.

Suggestions by friends that Bercow would resign this summer – after he had served 10 years in office – first came in the wake of a damning report by Dame Laura Cox which said bullying and harassment in parliament were being ignored due to a tradition of “deference and silence”. The report followed a Newsnight investigation that claimed Bercow bullied his former private secretaries, Angus Sinclair and Kate Emms, something he denied.

Bercow made no public confirmation that he planned to leave and then changed his mind after the UK failed to leave the EU in March.

It is not clear what Bercow plans for his life after the speaker’s chair. Asked in 2011 when he planned to stand down, Bercow said he’d do the job for a maximum of another nine years. “I’m enjoying the role and trying to make a difference – and then I will disappear,” he said. – Guardian