The killing of women: France tries to tackle wave of femicide

100 French women have been murdered so far this year, prompting government to act 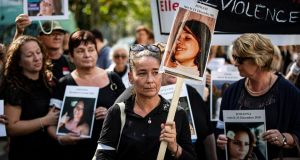 Women hold placards depicting victims as they march to denounce violence against women and femicide, in Paris on Tuesday. Photograph: Ian Langsdon/EPA

The counsellor on the 3919 hotline argued with the gendarme for a quarter of an hour, vainly trying to persuade him to accompany the battered wife home to collect her belongings. “This woman’s life is in danger. Are you waiting for her to be killed?” Elena, the counsellor, asked.

Elena took the call from a 57-year-old woman who had gone to file a complaint against the abusive husband she was leaving after 40 years of marriage. She wanted protection, but the gendarmes refused.

“I need a bailiff’s order. It’s not in the penal code,” a gendarme said when the counsellor asked to speak to him.

President Emmanuel Macron sat beside Elena at the hotline headquarters in northeastern Paris, listening on headphones, on September 3rd, the first day of a government conference on violence against women. Neither the battered wife nor the gendarme knew of Macron’s presence.

This is a process of sexist control, so rooted in our mentality and habits that some men have grown used to impunity

“It’s up to the gendarme to protect her in a situation where the risk is obvious,” the president scribbled in a note to Elena. “It’s a problem of training and the perception of danger, not of decrees or laws,” he surmised when the call was over.

The Agence France Presse and Libération newspaper were allowed to witness Macron’s two-hour plunge into the dark world of domestic violence. The gendarmerie announced later that it was investigating the refusal to protect the battered wife, something that happens “more and more often”, according to Elena.

The South African feminist Diana Russell was the first to use the word femicide in 1976, to describe “the killing of females by males because they are female.”

The word entered the French dictionary as “feminicide” in 2015. It does not yet figure in the penal code, as feminists demand.

The 100th victim of femicide this year, a 21-year-old called Salomé, was killed in Cagnes-sur-Mer in the early hours of September 1st. Her 26-year-old boyfriend is accused of hiding her body beneath a pile of rubbish near the railway tracks. Before she died under her partner’s blows, witnesses heard Salomé screaming, “I’m leaving you.”

“These are not fights in a couple where both sides are wrong,” Philippe said. “This is a process of sexist control, so rooted in our mentality and habits that some men have grown used to impunity . . . For centuries, women have been buried beneath our indifference, our denial, our ineptitude and machismo, our inability to look this horror in the face.”

Speaking before representatives of 80 associations, police, judges and the ministers for education, justice, the interior and equality between men and women, the prime minister said €5 million will be spent to create room for 1,000 more women in shelters, in addition to the 5,000 already in place.

The government conference is scheduled to continue until November 25th, the United Nations International Day for the Elimination of Violence against Women.

From November 25th, French women will be able to file complaints from hospital, instead of being forced to go to a police or gendarmerie station.

The government will conduct an audit of 400 police and gendarmerie commissariats, double the annual number to date. These checks include interviews with head officers, surprise visits and interviews with victims. The latter will be increased substantially, and a report will be drawn up on each commissariat. Security forces say they lack training and personnel.

Other measures include the appointment of specialised prosecutors and emergency courts to process cases of domestic violence more quickly. Macron’s party, LREM, has proposed a draft law requiring violent partners to wear an electronic bracelet to prevent them approaching victims, even in the absence of a conviction.

Men who have threatened or injured their partners often know where to find them again because they enjoy visiting rights for offspring. This will be revised. In the event of femicide, fathers will lose access to their children.

Feminist groups said the announcements were a good start, but criticised the lack of funding. According to a November 2018 study by the High Council for Equality, the state spends €79 million annually to help abused women. The council said between €506 million and €1.1 billion is needed.

Le Monde newspaper conducted an in-depth investigation into the 120 femicides committed in 2018. Case by case, its journalists studied what was or was not done by the authorities and social services. The newspaper said it was convinced that “a large portion of these femicides could be avoided, if French society gave itself the means”.

1 Brightest comet of the century visible in Irish skies for the next week
2 Johnny Depp: Ex-wife or friend defecated in bed in ‘fitting end’ to marriage, court hears
3 Reopening of pubs that do not serve food may be delayed beyond July 20th
4 Man tried to steal cars while high on crack and holding chihuahua
5 Delicious details of Mary Trump’s book open up world of president’s family
Real news has value SUBSCRIBE