Brexit: Johnson tells Varadkar a no-deal Brexit ‘would be a failure’ 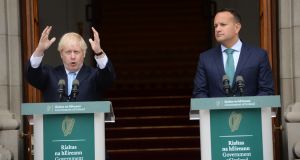 British prime minister Boris Johnson said he wants a Brexit deal by October 18th and said a no-deal Brexit would be a failure the British and Irish governments would be responsible for.

Ahead of a meeting at Government Buildings in Dublin this morning with Taoiseach Leo Varadkar, Mr Johnson said he believed a Brexit deal was still possible by the EU summit in October.

“I think what the British people want us to do is to deliver a deal and to get on and take us out on October 31st.”

The meeting was later described in a joint statement from the two governments as “positive and constructive”.

The Taoiseach told Mr Johnson protecting peace on the island of Ireland was one of his top priorities.

“The people of this island, North and South, need to know that their livelihoods, their security and their sense of identity will not be put at risk as a consequence of a hard Brexit.”

“The stakes are high. Avoiding the return of a hard border on this island and protecting our place in the single market are the Irish Government’s priorities in all circumstances. “We must protect peace on the island and the burgeoning success of the all-island economy.

“This is why the backstop continues to be a critical component of the Withdrawal Agreement, unless and until an alternative is found,” Mr Varadkar said.

Speaking before it was confirmed that the British parliament would be suspended later after a vote today on holding an early general election, Mr Johnson said he was “ absolutely undaunted by whatever may take place in parliament”.

Mr Johnson said he was bringing ideas on ways to resolve the backstop issue but stressed a breakthrough was unlikely on Monday.

“I have one message that I want to land with you today, Leo, that is I want to find a deal, I want to get a deal,” Mr Johnson said.

“Like you I’ve looked carefully at no-deal, I’ve assessed its consequences both for our country and yours.

“And yes, of course, we could do it, the UK could certainly get through it but be in no doubt that outcome would be a failure of statecraft for which we would all be responsible,” Mr Johnson said.

“So for the sake of business, for farmers, and millions of ordinary people who are counting on us to use our imagination and creativity to get this done. I want you to know I would overwhelmingly prefer to find an agreement.”

The Boris bravado has disappeared in Dublin, saying No Deal would be a “failure of statecraft”.

He is now going all out for Mrs May’s “deal”, with Northern Ireland to be hived off from the rest of the UK.

A clean break Brexit is the only way forward.

Mr Johnson said it was essential Britain left the EU by the deadline of October 31st.

He said it should be possible to do so while preserving the unchecked movement of people and goods across the Irish Border, maintaining the Good Friday Agreement and protecting the economic unity of the island of Ireland.

“I think we can achieve these things while allowing the UK to withdraw whole and entire from the EU,” Mr Johnson said.

“Strip away the politics and at the core of each problem you find practical issues that can be resolved with sufficient energy and a spirit of compromise,” the prime minister said.

The joint statement issued after the meeting said “common ground was established in some areas, though significant gaps remain” but gave little detail about the exchanges between the two leaders.

The two men met privately for half an hour over breakfast and then joined their official delegations for another half hour meeting.

The statement also acknowledged that the negotiations on any new Brexit deal will take place between the UK and the EU.

The two men also noted their “commitment to the Good Friday Agreement and the restoration of the power-sharing institutions in Northern Ireland”.

One of the ideas being considered is a Northern Ireland-only backstop, an all-island regulatory regime which could see Northern Ireland diverging from the rest of the UK.

This option has been is been raised by Mr Johnson in recent days.

Mr Varadkar said the backstop was a critical component of the Withdrawal Agreement, unless alternatives are found.

He said no alternatives have yet been received but added he was confident the two leaders could find some common ground today.

“We both agree we have much to discuss, we accept the democratic and sovereign decisions to leave the EU,” Mr Varadkar said.

“However, in my view, the story of Brexit won’t end if the UK leaves the EU on October 31st or January 31st.

“There is no such thing as a clean break.”

“We all have to deal with issues like tariffs and state aid, ratified by 28 governments.”

Mr Varadkar said Ireland was “open to all alternatives legally workable but we have not received such to date.

“The Good Friday Agreement is the best example to show that old foes can come together and as co-guarantors of that agreement.

“I look forward to talking to you about how we can restore the institutions in Northern Ireland.”

Mr Varadkar added both leaders have a shared desire to see the restoration of the devolved administration at Stormont, which has been deadlocked between the two main parties over equality issues.

“The Tánaiste (Simon Coveney) and Secretary of State (Julian Smith) are already working closely together on that,” the Taoiseach said.

“The Good Friday Agreement is proof that old foes can come together to deal with the most intractable of problems. As co-guarantors of the Agreement, I look forward to exploring with you, how working with the Northern Ireland parties, we can restore powersharing and devolution.”

The Taoiseach, who has said he would be open to an extension to Brexit if there is good reason, added that more talks will be needed in any circumstance which the UK leaves the EU.

Mr Johnson promised the UK would not impose border checks, but refused to be drawn on the particulars of any plan to avoid this scenario.

Meanwhile, Britain’s Queen Elizabeth on Monday gave final approval to a piece of legislation which seeks to prevent Prime Minister Boris Johnson from taking the country out of the European Union without an exit deal on October 31st.

The step, known as Royal Assent, is effectively a rubber-stamp from the monarch for the law which passed through parliament last week despite opposition from the government.

The Royal Assent was announced in parliament’s upper chamber, the House of Lords. – Additional reporting Reuters

1 Man tried to steal cars while high on crack and holding chihuahua
2 Johnny Depp: Ex-wife or friend defecated in bed in ‘fitting end’ to marriage, court hears
3 Coronavirus: One death, 25 new cases reported in State
4 Brightest comet of the century visible in Irish skies for the next week
5 Bobby Storey: The IRA's planner and enforcer who stayed in the shadows
Real news has value SUBSCRIBE