Bercow to stand down as Commons speaker at end of October

The speaker of the House of Commons John Bercow has announced that he is to stand down as speaker and as an MP at the end of the current parliament, Bercow has served as speaker since June 2009. Video: UK Parliament TV 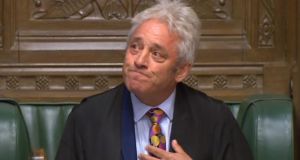 John Bercow has announced that he will stand down as Commons Speaker at the end of next month unless an election is called beforehand.

In an impassioned speech Mr Bercow, who has held the influential post for just over 10 years, also said he would step down as MP for Buckingham.

The speaker told the Commons he would resign on Monday night in the unlikely event MPs vote for an early general election, but said if they did not he would stand aside on October 31st.

As his wife Sally looked on from the gallery, Mr Bercow said: “At the 2017 election, I promised my wife and children that it would be my last.

“This is a pledge that I intend to keep. If the House votes tonight for an early general election, my tenure as Speaker and MP will end when this Parliament ends.

“If the House does not so vote, I have concluded that the least disruptive and most democratic course of action would be for me to stand down at the close of business on Thursday October 31st.”

The Speaker added that he has “sought to be the backbenchers’ backstop”, and thanked his team in the Speaker’s House for their work behind the scenes.

Mr Bercow entered Parliament in 1997 and held several shadow ministerial positions before taking the Speaker’s chair on June 22nd 2009, promising to serve “no more than nine years in total”.

He abandoned that commitment ahead of the 2017 snap election, but allegations of bullying by former members of his staff, denied by the Speaker, led to fresh calls for him to quit.

In recent months he has also come under fire for a series of controversial rulings in the chamber which were widely considered to favour Remain supporters.

Labour leader Jeremy Corbyn praised Mr Bercow for being a “superb” Speaker, and said he had “totally changed the way in which the job has been done”.

“And whatever you do when you finally step down from Parliament, you do so with the thanks of a very large number of people,” Mr Corbyn said.

For the Government, Chancellor of the Duchy of Lancaster Michael Gove said it was clear Mr Bercow loved the House of Commons and democracy, adding: “Your commitment to your principles and to your constituents is unwavering and an example to others.”

Mr Gove joked that he hoped Mr Bercow would not take it personally when he votes for an early general election, adding: “It is the case that however controversial the role of the backstop may be in other areas, your role as the backbenchers’ backstop has certainly been one that’s been appreciated by individuals across this House.”

In another development in Westminster on Monday, Boris Johnson’s government has been told to publish communications connected to prorogation and no-deal Brexit planning after MPs supported an emergency Commons motion.

Former attorney general Dominic Grieve’s demand for all written and electronic contact about the temporary suspension of Parliament and Operation Yellowhammer documents since July 23rd to be released was approved by 311 votes to 302.

He used the parliamentary device of a humble address to the Queen to ask for the documents to be put before the Commons by ministers by no later than 11pm on Wednesday.

Mr Grieve, now sitting as an independent MP after losing his place in the Tories, said public officials had given him information relating to prorogation that informed him “they believed the handling of this matter smacked of scandal”.

He told MPs: “That places me in a difficulty because it is simply the information that I’ve been given and I want to make absolutely clear that I’m not in a position any more than I think any member in this House is to be able to ascertain if that information is mistaken or not.

Mr Grieve’s motion asked for all correspondence and communications, whether formal or informal, including WhatsApp, Telegram, Signal, Facebook messenger, private email accounts, text messages, iMessage and official and personal mobile phones connected to the present Government since July 23 relating to prorogation, to be handed over.

The demand came after documents released in a Scottish court showed Mr Johnson appeared to have approved the prorogation on August 15, despite subsequent official denials and the public announcement being made nearly two weeks later, on August 28th.

Elsewhere, the British parliament will be prorogued at the close of business on Monday, Downing Street has confirmed.

The prime minister’s official spokesman said that while the government would obey the law, Mr Johnson would not be requesting another extension of the Article 50 EU withdrawal process.

“The prime minister is not going to seek an extension,” the spokesman said.

“If MPs want to resolve this there is an easy way – vote for an election today and let the public decide.”

Britain’s Queen Elizabeth gave final approval to a piece of legislation which seeks to prevent prime minister Boris Johnson from taking the country out of the European Union without a deal on October 31st.

The step, known as Royal Assent, is effectively a rubber-stamp from the monarch for the law which passed through parliament last week despite opposition from the government.

The Royal Assent was announced in parliament’s upper chamber, the House of Lords. – PA and Reuters