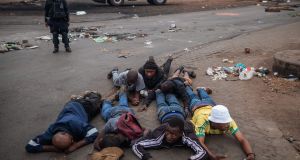 South Africa’s defence minister has said that that no government could stop the type of urban unrest currently gripping the country, following a fresh wave of mob violence in Johannesburg on Sunday.

Nosiviwe Mapisa-Nqakula made the comments on local TV station eNCA on Monday, after her government was accused of failing to bring the anti-foreigner violence that first began two weeks ago under control.

Ms Mapisa-Nqakula denied the attacks were xenophobic in nature, but instead said they were orchestrated by criminals taking advantage of people’s frustrations and the economic hardship gripping the country.

“The reality is that we are an angry nation and we must talk about it, we must take responsibility,” she said, adding: “What’s happening can never be prevented by any government. This is well orchestrated by criminal elements.”

Sunday’s violence, which left two people dead and up to six injured, began after a veteran Zulu politician gave a speech in Johannesburg to members of his tribe to try to quell tensions between locals and foreigners.

Inkatha Freedom Party founder Prince Mangosuthu Buthelezi had been holding a meeting with predominately Zulu hostel residents in Jeppestown in an attempt to bring the xenophobic violence in the area to an end.

He said he was depressed and ashamed about the events that had unfolded over the past 10 days, as it was tarnishing the name of South Africa across the continent.

However, a section of the crowd ignored his pleas for peace and went on the rampage later in the day in Johannesburg’s central business district, looting and attacking foreigners, who they blame for taking jobs they say are rightfully theirs.

Sunday’s deaths mean that at least 12 people have been killed – 10 South Africans and two foreigners – in the violence so far. More than 400 people have also been arrested in connection with the unrest, according to police.

President Cyril Ramaphosa also condemned Sunday’s violence, saying the authorities would “not allow sporadic lawlessness and violence” to disrupt the safety and livelihoods of South Africans and foreign nationals living in the country.

The crisis has led to diplomatic tensions between South Africa and other African nations, most notably Nigeria, which last week sent an envoy to the country seeking assurances that more will be done to protect its citizens.

South Africa’s international relations minister Naledi Pandor met the heads of diplomatic missions on Monday to try to allay fears of further violence against their citizens.

In addition, she called on African leaders not to use inflammatory language when addressing the matter in their own countries, in an effort to avoid reprisal attacks against South Africans.

South Africa is a major destination for economic migrants from across Africa, and xenophobic attacks are not uncommon, especially in the country’s poorest urban areas.

In 2008 more than 60 foreigners were killed in xenophobic violence in Gauteng and KwaZulu-Natal provinces, while an estimated seven Africans were killed there under similar circumstances in 2015.