Renominated commissioners include Phil Hogan and his expectation of trade portfolio 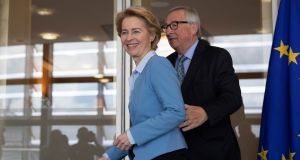 The incoming European Commission will be close to gender-balanced for the first time in its history. President-elect Ursula von der Leyen on Monday listed her new team – 14 men and 13 women – and will on Tuesday reveal her proposed job allocations.

Ms von der Leyen gave her formal approval to the list nominated by the heads of government, after she had threatened to reject nominations unless she achieved gender equality.

Among the renominated commissioners, as expected, was Ireland’s agriculture commissioner Phil Hogan, who is expected to be given charge of the important trade dossier. The remit will include responsibility for steering key elements of the negotiations with the UK over its post-Brexit future relationship and is seen by Ireland as a strategic post.

His nomination will also be seen by Dublin as an important expression of ongoing solidarity with Ireland over Brexit.

Mr Hogan’s agriculture portfolio is expected to go to Poland’s Janusz Wojciechowski, while fellow outgoing commissioners Franz Timmermans and Margrethe Vestager will be appointed vice-presidents. Their number will be joined by at least one eastern European member in addition to the expected retention by Latvia’s Valdis Dombrovskis of a co-ordinating economic brief. They will be among a total of eight vice-presidents.

The new team, which has yet to be vetted by MEPs, will serve until 2024 and takes over on November 1st from Jean Claude Juncker’s commission.

The full team also includes Ms von der Leyen (Germany) herself and the European Council’s nominee for high representative for foreign and security policy, Josep Borrell (Spain), who is also a member of the commission.

Following Ms von der Leyen’s eagerly awaited proposed allocation of portfolios on Tuesday, the new team will face questioning by the European Parliament’s specialist committees. The MEPs have the right to reject the whole list but, to avoid that nuclear option, traditionally indications of strong disapproval of any one candidate leads to their withdrawal and an alternative name from the incoming president.

The UK has not nominated anyone on the presumption that it will have left the EU by November 1st. Should that not be the case, it is expected that it will meet the treaty obligation of one commission member per state with a temporary nominee.