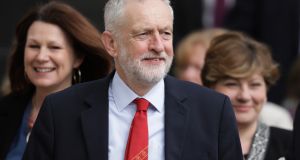 Jewish community leaders have described a meeting with Jeremy Corbyn as “a disappointing missed opportunity” to address the problem of anti-Semitism in the Labour Party.

The Board of Deputies of British Jews and the Jewish Leadership Council said after the 2½-hour meeting at Westminster that the Labour leader failed to agree to any of the concrete actions they had called for.

“We welcome the fact that Mr Corbyn’s words have changed but it is action by which the Jewish community will judge him and the Labour Party. Our sole objective from this meeting was to build trust with Mr Corbyn, but this will not be possible until and unless he and the party turn their many strong words against anti-Semitism into equally strong actions in order to bring about a deep cultural change in his supporters’ attitude to Jews,” they said.

Writing in the Evening Standard ahead of the meeting, Mr Corbyn apologised for anti-Semitism within the Labour Party and admitted that he had not done enough to deal with the problem. But the Jewish leaders said the proposals he advanced during their meeting fell short of the minimum level of action the problem required.

The two groups, which made an unprecedented protest last month about the Labour leader’s failure to tackle anti-Semitism, identified actions they wanted the party to take.

They wanted a fixed timetable to deal with anti-Semitism cases; that they should expedite the long-standing cases involving Ken Livingstone and Jackie Walker; that no MP should share a platform with somebody expelled or suspended for anti-Semitism; that Labour adopt the full International Holocaust Remembrance Alliance (IHRA) definition of anti-Semitism with all its examples and clauses; and that an independent ombudsman should oversee its disciplinary process.

The IHRA definition, which the British government accepts, describes anti-Semitism as “a certain perception of Jews, which may be expressed as hatred toward Jews. Rhetorical and physical manifestations of anti-Semitism are directed toward Jewish or non-Jewish individuals and/or their property, toward Jewish community institutions and religious facilities.”

The examples it cites include criticisms which target Israel, if this was “conceived as a Jewish collectivity” and “denying the Jewish people their right to self-determination, eg, by claiming that the existence of a State of Israel is a racist endeavour”. But the definition says that “criticism of Israel similar to that levelled against any other country cannot be regarded as anti-Semitic”.

In his Evening Standard article, Mr Corbyn said that anti-Zionism was not in itself anti-Semitic but he acknowledged that “individuals on the fringes of the movement of solidarity with the Palestinian people can stray into anti-Semitic views”.

Speaking after Tuesday night’s meeting, the Labour leader described it as “positive and constructive” and promised further engagement with Jewish community organisations.