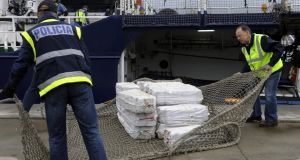 Spanish customs officers and police unload a shipment of cocaine from a vessel called Riptide at the port of Vigo, northwestern Spain, in June 2013. File photograph: Miguel Riopa/AFP/Getty Images

The Spanish TV series Fariña has captivated viewers and raised the bar for national television with its depiction of drug dealers on the Atlantic coast in the 1980s. But one of the real-life characters featured in the programme is accusing it of being libellous – not for showing his deep involvement in Galicia’s cocaine-smuggling industry, but for a scene in which he cavorts in bed with his wife.

Laureano Oubiña, a notorious figure in that period’s drug mafia who has spent two decades in jail, wants the producer of the programme, Bambú Producciones, and TV network Antena 3, to pay €1.5 million in damages to a religious charity for drug addicts.

His lawyer, Manuel Álvarez de Mon, claims that the bedroom scene, at the end of which he is arrested, represents “an invasion of his intimacy”.

It’s the latest twist for a TV series whose extraordinary success has been fuelled by controversy.

Fariña (which means “flour”, a nickname for cocaine in the Galician language) tells the story of how, in the 1980s, members of the local community in northwestern Spain got involved in drug trafficking, turning the rural, relatively poor region of Galicia into Europe’s main point of entry for cocaine.

The series is based on the book of the same name by Galician journalist Nacho Carretero, who has said the drug barons that emerged at that time “came across as saviours – they created jobs and wealth, they were highly regarded”.

Earlier this year, a judge ordered Carretero’s book to be pulled from bookshelves after a local politician complained that he, too, had been libelled. José Alfredo Bea, former mayor of the town of O Grove, is suing Carretero and his publisher for €500,000 over two brief mentions in the book, linking him to drug-trafficking. Bea was once found guilty of drug-smuggling offences before being absolved by the supreme court, although he later served a four-year term for money-laundering.

The seizure of the book took place in late February, handing the TV series a propaganda coup

The book’s seizure drew accusations of unwarranted censorship and has fed into an already lively debate in Spain about alleged restrictions on freedom of speech in music, art, literature and social media.

In response, a series of public readings of Fariña were staged, to protest against its seizure. A digital application was also created, hiding Carretero’s text within that of Spain’s most celebrated work of literature, Don Quixote. A judge swiftly moved to order the “immediate elimination” of the app, which was called “Finding Fariña”.

Such judicial measures appear to have been in vain. The book’s confiscation made the title, which was first published in 2015, headline news and second-hand copies now sell online for €70.

The seizure of the book took place in late February, handing the TV series a propaganda coup. Its first episode was reportedly brought forward in order to capitalise on the furore and was broadcast just days later.

But the quality of the series and its faithfulness to the source material have also driven its success. In a TV industry often hampered by lacklustre scripts and a reluctance to embrace realism, Fariña has broken new ground, showing that Spain can produce gritty period drama and faithfully represent the culture of an unglamorous region – Galicia – with sharp production and local actors using their native accent.

Nearly 3.5 million Spaniards watched the first episode, a huge number for an untried, locally made programme, and half of Galicians reportedly tuned in that day

El País newspaper praised the show’s insistence on treating viewers as “intelligent people” and its innovative style. “Now they’ve got us hooked we want more of the drug, we want to see the rest of the episodes,” it noted.

Nearly 3.5 million Spaniards watched the first episode, a huge number for an untried, locally made programme, and half of Galicians reportedly tuned in that day.

Amid all the success, Carretero has warned that the drug industry is still very much a problem in Galicia. “Day to day its presence is very obvious, and I don’t see the locals doing anything to face up to it,” he said. In 2016, an estimated 60 tonnes of cocaine entered Europe via Galicia, only a 10th of which the authorities seized.

In recent years the industry has continued to haunt the political class. In 2013, photos emerged from the 1990s of the current president of the Galicia region, Alberto Núñez Feijóo, holidaying on a boat with a notorious drug trafficker now serving a jail sentence. Feijóo fended off calls for his resignation and remains a favourite to succeed prime minister Mariano Rajoy as leader of the governing Popular Party (PP).

Although Fariña is based three decades ago, its subject matter and the controversy surrounding it – involving tainted politicians, drastic court decisions and complaints of attacks on freedom of speech – make it very much a tale of contemporary Spain.