Jeremy Corbyn is leading his party into history’s mausoleum

UK Politics: Labour’s decline is a loss to the world, not just a tragedy for British politics 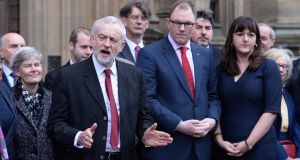 Theresa May runs an imperious government and still no one knows if it is any good. Britain’s Conservative prime minister can cite poll leads, mastery of parliament, electoral gains in the rust belt and other feats that are more or less hollow in the absence of competition from the Labour Party.

It is as if a great beast has vanished from the food chain, leaving its immediate prey to rampant overpopulation. We would not assume any genius on the part of the second creature.

The world, not just Britain, should consider what it stands to lose as Labour saunters into history’s mausoleum. In the 20th century, the party was indispensable to a Nazi-defeating national government. It was anti-Soviet. It was not just pro-Nato but part-progenitor of it. In its postwar foreign secretary Ernest Bevin, it gave the free world a statesman who helped to set it up for the cold war. Even Labour’s lapse into teenage idealism in the 1980s did not hamper its support for martial defence of the Falkland Islands.

Again and again, when parts of the European left plumped for relativism and strategic non-alignment, Labour chose western unity. Its decline under Jeremy Corbyn is a tragedy for more than the competitive equilibrium of domestic politics. It is the world’s loss.

The trouble is that his deficiencies are so severe as to feed the notion that he, not his doctrine, is the ultimate problem – that a younger, slicker frontperson for a similar strain of leftwingery would turn things around.

Corbynism without Corbyn: the left will congeal around this as the way forward if only to save itself the harshest trauma in politics, that of recognising one’s own beliefs as too marginal to carry the nation.

Labour MPs say those around Corbyn pin the party’s malaise on the media, previous leaders, disloyal colleagues and everyone else but their man. The trouble will start when they do blame him.

The myth of individual culpability allows them to salvage the underlying dogma and try again under new leadership. Whether Corbyn goes before or after the next general election, scheduled for 2020, his erstwhile supporters will recruit a more persuasive vessel for their socialism and pacifism – as if a country that has not returned a prime minister to the left of Tony Blair since 1974 has any interest in either. This way, Labour can waste another electoral cycle, not just this one and the last one.

Only the left, say those MPs who are not of it and shudder at memories of last year’s failed move against him, can remove Corbyn. But then only the left misunderstands his failure as a failure of technique and media nous. In truth, poor communication of his beliefs is what saves the party’s hide right now. MPs should dread an improvement in his performance.

If more voters knew his politics, the vote share could sink from the 26 per cent recorded by some polls to a percentage countable on the digits of a human body. And be clear about this: they will know. The scrutiny of a general election campaign will see to that. The Tories, who have an attack dossier that touches the 19th century Russian novel in its fearsome amplitude, will very much see to that.

In an age of surprises – the Brexit vote, President Donald Trump, the May premiership – Corbyn shows that not everything has become mysterious. He has done as badly as conventional wisdom predicted. Labour’s future will be decided by the race to interpret why.

The left must spin it as the personal shortcomings of one man. The alternative is too awkward to entertain. They can admit, just about, to backing a dud, though words to that effect often seem to catch in their throats. But they cannot allow that their worldview would remain unelectable if they brought Barack Obama out of retirement to front it, and Niccolò Machiavelli out of the grave to run the strategy grid. No, that kind of admission wounds something deeper than amour propre.

There is some honour in this. Indeed, the hard left has been more principled of late than the soft left, those flighty enablers of Corbyn’s candidacy who are now bored of their toy.

They looked past his prolific opposition to his own party over 30 years in parliament. They shuffled their feet and stared at the ground when Tories brought up his record of relativist noises – on terror and extremism, on the west and its enemies.

But then, this month, he told his MPs to vote for Britain’s negotiated exit from the EU – a mere enactment of the popular will – and the soft left renounced him like an infidel. You see, they do have their standards.