House of Lords gives May third Brexit defeat in one week 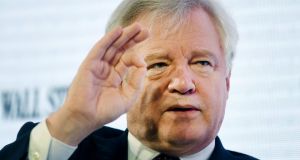 British secretary of state for exiting the European Union David Davis: made a brief visit to the Border in Co Armagh on Monday, his first visit since taking up his post. Photograph: Andy Rain/Reuters

Theresa May’s government has suffered its third major parliamentary defeat on Brexit in a week, with the House of Lords voting to retain the European Charter of Fundamental Rights after Britain leaves the EU. A total of 316 peers backed the amendment to the EU Withdrawal Bill, with 245 voting against.

Last week, peers passed an amendment calling on the government to explain to parliament what it has done to negotiate “an arrangement which enables the United Kingdom to continue participating in a customs union” with the EU. The government also suffered a defeat last week on a vote to maintain protections for workers, consumers and the environment after Brexit.

On Thursday morning, MPs will debate a motion calling on the government to seek to remain in a customs union with the EU to avoid a hard border in Ireland.

Downing Street on Monday sought to calm speculation that Ms May could abandon her promise to leave the customs union and the single market when Britain leaves the EU.

“We are leaving the customs union, we will have an independent trade policy and we’ll be free to strike trade deals around the world,” the prime minister’s official spokesman said.

He said the government remained committed to the two alternative customs models it proposed last August, which have been rejected by the EU as impractical. The first, a “customs partnership”, would see Britain collecting tariffs on behalf of the EU for goods entering the country en route to Europe and applying its own tariffs to imported goods destined for the British market.

“We think both of the options we have put forward can address the issue of the Irish Border and of facilitating smooth customs arrangements with the European Union, ” the spokesman said.

Some Conservative Eurosceptics have called on the government to abandon its proposal for a customs partnership, fearing it could be used as a route towards a customs union. Thursday’s customs union vote in the House of Commons is non-binding and the government has indicated that many of its MPs will not turn up to vote.

Next month, however, will see votes on amendments to two pieces of legislation which would oblige the government to seek to remain in a customs union with the EU.

Brexit secretary David Davis made a brief visit to the Border in Co Armagh on Monday, his first visit since taking up his post in 2016.

“As we leave the EU it’s essential both the UK and EU do what it takes to keep the Border, which I saw this morning, free from physical infrastructure. We are determined to get this agreed by October,” he said.

In a speech on financial services on Monday, international trade secretary Liam Fox said Britain would not only negotiate new trade deals after Brexit but would be free to cut regulation.

“We will work with old allies and new partners across the world, utilising the UK’s economic strength and diplomatic prowess to forge new trading relationships. Ultimately, our task is to remove the unnecessary regulation, bureaucracy and red tape that inhibit the free trade in services. Whatever one’s view on the referendum result, it must be acknowledged that, outside the EU, this country will enjoy a new degree of economic agility,” he said.