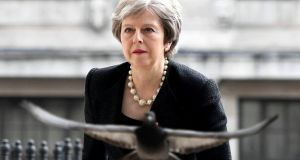 After a small flutter in the dovecote of Theresa May’s cabinet over the weekend, Downing Street on Monday restated her unequivocal commitment to leaving the customs union after Brexit.

But the prime minister’s spokesman also ruled out abandoning one of the two customs options Britain has proposed to the EU, pointing out that both had been included in her Mansion House speech, which was signed off in advance by the entire cabinet.

The EU has rejected both proposals but Eurosceptics fear that one of them, a “customs partnership” could create a path to a customs union with the EU. For most Conservative MPs, leaving the customs union is an indispensable step towards their vision of Global Britain, with new trade deals around the world.

The prime minister’s problem is that her approach does not command a majority in parliament, where fears about the impact of leaving the customs union on British manufacturers and on the Border in Ireland are growing as Brexit approaches.

Thursday’s vote on customs union membership in the House of Commons will not be binding but it will give an indication of how many Conservatives are willing to defy the government on the issue. Next month, amendments to two Bills will include a commitment to membership of a customs union with the EU and those votes will be binding.

Brexiteers have been muttering about making next month’s votes confidence votes, something that is impossible under the Fixed Term Parliaments Act. May could threaten to ask parliament to call an election if she loses a vote on the customs union, or she could threaten to resign.

Both moves are risky for the Conservatives, who are reluctant to test the voters’ affection after last year’s election. And threatening to remove the whip from rebel MPs could be a self-defeating step for a government without a majority.

Brexiteers fear the parliamentary arithmetic, combined with Brussels’s rejection of Britain’s customs proposals and the need to show how a hard border can be avoided, will push the prime minister into seeking some kind of customs union with the EU.

Remainer MPs hope that Irish and EU negotiators will hold out for a solution to the Border issue that keeps the whole of the UK in a customs union. Over the next few weeks, however, the ball is in parliament’s court.