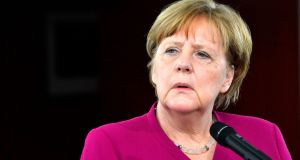 Angela Merkel, who said the German state would do “everything” for the security of Jews and people of Jewish origin in Germany. Photograph: John MacDougall/AFP/Getty Images

Chancellor Angela Merkel has said it was “depressing” that Germany had not been able to stamp out anti-Semitism – both domestic and imported.

The German leader told an Israeli television station she was shocked by a recent series of high-profile anti-Semitic attacks in Germany. Last week a 20-year-old kippa-wearing Israeli man uploaded a video of a young Syrian man flogging him with a belt in broad daylight in Berlin.

“It depresses me that we have not been able to get a handle on anti-Semitism for once and for all,” she told Israeli’s Channel Ten. “We have a new phenomenon of refugees or people of Arab origin who bring another form of anti-Semitism into the country but sadly we also had anti-Semitism beforehand.”

Last December a German man was filmed verbally attacking an Israeli man outside his restaurant in Berlin, saying “you will all land in the gas chambers”. He was arrested by police.

Already synagogues, Jewish community centres, schools and other facilities have a round-the-clock police guard in Germany. In recent months several Jewish families have reported how their children have been verbally and physically attacked by fellow students, often from families with Turkish or Arab roots.

Dr Merkel said the German state would do “everything” for the security of Jews and people of Jewish origin in Germany, and she would make this clear during a visit to Israel in the second half of this year.

Germany’s anti-Semitism debate took a new turn last week after a rap duo, who sang of having “bodies more defined than an Auschwitz prisoner”, were awarded Germany’s equivalent of a Grammy. Since then a series of recording artists have handed back prizes won in previous years.

On Monday, the most recent – and high-profile – to join their number: conductor and pianist Daniel Barenboim.

Since 2000 the Argentinian-Israeli musician has been music director of Berlin’s Staatskapelle, house orchestra of the capital’s state opera. He is also head of the West-Eastern Divan Orchestra, comprising young Palestinian and Israeli musicians.

In a statement Mr Barenboim said the rap duo’s best-selling album – in which the artists sing of “carrying out another Holocaust with a molotov” – was “clearly anti-Semitic, misogynist, homophobic and generally inhuman”.

“We have to rise up, united, against such voices and must not strengthen them by giving them prizes and thus legitimising them,” he said.

Since a jury awarded the prize to the duo, other Echo prizewinners to hand back their prizes include conductors Christian Thielemann and Mariss Jansons as well as the pianist Igor Levitt and the Notos Quartett.

Mr Thielemann, head of Dresden’s Staatskapelle orchestra, said the prize – awarded on a Holocaust memorial day – “is a mockery of Third Reich victims and a symbol of cynicism which we don’t represent”.