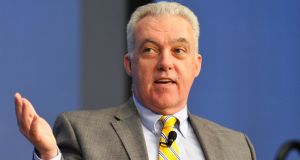 Kevin Cullen: part of the team which won the Pulitzer Prize in 2003 for its reporting of abuse in the Catholic Church. He is an occasional contributor to The Irish Times and a regular contributor on Irish radio. Photograph: Paul Marotta/Getty Images

Well-known columnist Kevin Cullen has been put on administrative leave by the Boston Globe, the newspaper has confirmed.

Cullen, an occasional contributor to The Irish Times and a regular contributor on Irish radio, has been put on paid leave while an examination of his coverage of the 2013 Boston Marathon bombings is conducted.

The 59-year-old was part of the team which won the Pulitzer Prize in 2003 for its reporting of abuse in the Catholic Church, the focus of the Oscar-winning film Spotlight. He previously ran the Boston Globe’s Dublin bureau.

The decision by the newspaper follows accusations by Boston sports radio station WEEI that Cullen misled readers in his coverage of the Boston Marathon bombings, suggesting that he was at the scene but later saying he was a mile away from it. Cullen also wrote about the bombings in The Irish Times.

When contacted by The Irish Times, Cullen said he was unable to comment on the matter.

In a statement, the Boston Globe confirmed that the matter would be examined. “The integrity of each of our journalists is fundamental to our organisation,” the newspaper’s editor Brian McGrory said.

“In light of questions that have publicly surfaced, Kevin Cullen has been placed on paid administrative leave while a thorough examination, involving a third party with expertise, is done of his work. We will be transparent with the results of the review.”