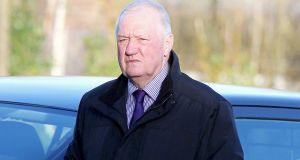 David Duckenfield, who was in command of the 1989 FA Cup semi-final at Hillsborough stadium when 96 people were killed, has formally pleaded not guilty to manslaughter charges at Preston crown court.

The former South Yorkshire police chief superintendent made his plea by videolink.

Graham Mackrell, who at the time was the secretary and safety officer of Sheffield Wednesday – the owners and operators of the football ground – also entered a plea of not guilty to two criminal charges of breaching safety legislation.

This was the first time both defendants had formally entered a plea to the criminal charges since the judge, Sir Peter Openshaw, ruled in June that their prosecutions should go ahead.

Mr Duckenfield is charged with manslaughter by gross negligence in relation to 95 of the people who died. No charge has been brought regarding the 96th victim, Tony Bland, who was 18 when he went to Hillsborough to support Liverpool at the match against Nottingham Forest.

Bland sustained severe brain damage due to loss of oxygen in the crush on the Leppings Lane terrace, and remained on life support in hospital for four years. The life support was turned off after a court application by his family, based on medical evidence that he would never recover from his vegetative state.

Mr Duckenfield has not been charged in relation to Bland’s death because a manslaughter charge in 1989 could not be applied if the victim died longer than a year and a day after the alleged criminal acts occurred.

The names of the 95 people with whose deaths he is charged were read out by the court clerk, Mark Nicholson, to Mr Duckenfield. A group of family members whose relatives were among those killed at Hillsborough were in the court’s public seats attending the hearing. When Mr Nicholson asked how he pleaded to the charges, Mr Duckenfield replied “not guilty” in a clear voice.

The maximum sentence for manslaughter by gross negligence is life in prison.

Mr Mackrell is accused of being culpable for Sheffield Wednesday’s failure to agree with the police before the semi-final the arrangements and number of turnstiles for admitting Liverpool supporters into the Leppings Lane and north-west terraces, in contravention of the club’s safety certificate for Hillsborough.

The second criminal charge accuses Mr Mackrell of failing to take reasonable care for people’s health and safety under the 1974 Health and Safety at Work Act. He is alleged to have failed as the club’s safety officer to take reasonable care in relation to arranging for sufficient numbers of turnstiles so “no unduly large crowds would be waiting for admission”, and in drawing up contingency plans for coping with “exceptionally large numbers of people arriving at the ground” and to deal with situations where the available entrances “have proved insufficient to stop unduly large crowds from gathering outside”.

The maximum sentence for the first charge is two years in prison; for the second, the maximum is an unlimited fine.

Three other men face criminal charges in relation to the disaster. Donald Denton, a former South Yorkshire police chief superintendent, Mr Denton’s then deputy, the former chief inspector Alan Foster, and the then South Yorkshire police solicitor, Peter Metcalf, are charged with doing acts with intent to pervert the course of justice.

The trials of Mr Duckenfield and Mr Mackrell are listed to start in Preston on January 14th, 2019. – Guardian