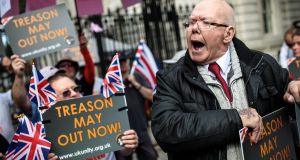 Brexit secretary Dominic Raab has dismissed a Canada-style free trade agreement with the European Union as unacceptable because it would trigger a backstop that would consign Northern Ireland to an indefinite limbo.

“I think you need to accept the small print of the offer that is being made in relation to the appendage of the backstop the EU is proposing, which ultimately would involve a limbo period to be determined by the EU, which could proceed indefinitely,” Mr Raab said.

Mr Raab was appearing before the committee alongside Theresa May’s top European affairs adviser, Olly Robbins, who faced hostile questioning from Brexiteers. Labour’s Stephen Kinnock said that Mr Barnier had told MPs during a visit to Brussels this week that Theresa May’s Chequers proposals were dead in the water.

During prime minister’s questions, Labour leader Jeremy Corbyn told Ms May that her Chequers proposal had already been ripped apart by her own party. The prime minister said the Chequers proposal remained a basis for negotiation with the EU and claimed it would fulfil the government’s promise to respect the Brexit referendum while protecting the economy and avoiding a hard border in Ireland.

In Brussels on Wednesday Labour’s shadow Brexit secretary Keir Starmer said his party could not vote for a Canada-style free trade deal because it would not satisfy the criterion it has set out demanding that any deal should offer the same benefits as EU membership.

“We have our six tests and it wouldn’t meet them, and I don’t think it would be approved by the Conservative Party because you have the other wing who would be concerned about the distance between a Canada deal from where we are now,” he said.

“At the end, the central problem for the prime minister is always the same: she has a warring party behind her, and the two sides can’t agree sufficiently to allow her to get a deal through unless she goes for a customs union plus single market deal with shared regulations and institutions. That I think would have a majority in parliament.”

Mr Starmer added: “Whatever the agreement – if there is one – it has to keep to the solemn commitment of no hard border with Northern Ireland. The only combination that will meet that commitment is a customs union with the EU and a single market deal with high alignment.”

Mr Starmer said his concern was that he did not believe Ms May was strong enough to adapt her position without facing a challenge to her premiership.

Labour has said it is keeping all options on the table, including that of a second referendum, should parliament fail to back any deal Ms May strikes with Brussels.