The Grenfell Tower inquiry has opened in London with a heartbreaking tribute to a baby who was stillborn in hospital hours after his parents and sisters escaped the fire on June 14th last year. Video: Reuters 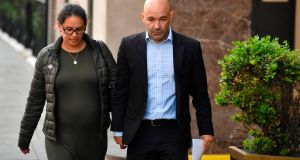 Marcio and Andreia Gomes, the parents of Logan Gomes, who was stillborn on the day of Grenfell Tower fire, arrive for the opening day of the inquiry into the tragedy in London on Monday. Photograph: Ben Stansall/AFP/Getty Images

The Grenfell Tower inquiry has opened with a tribute to a baby who was stillborn in hospital hours after his parents and sisters escaped the fire on June 14thlast year. Logan Gomes’s father Marcio, with his wife Andreia by his side, spoke about the happiness the prospect of their first son had brought to them.

“We had so much planned for him in terms of adventures,” Mr Gomes said. “He was going to support Benfica in Portugal and Liverpool in the UK.”

Mr Gomes and his family lived on the 23rd floor of the building when the fire engulfed it, killing 72 people. Ms Gomes was due to give birth to Logan in August but he was stillborn later on the day of the fire.

“He was so beautiful, so restful. He looked like he was just asleep. At that point, it felt like our hearts had broken,” Mr Gomes said.

The inquiry, which will run into next year, will spend the next two weeks hearing tributes to those who died from their friends and family. The inquiry’s chairman Martin Moore-Bick began the hearing with a 72-second silence in honour of the victims. He described the fire as the greatest tragedy to befall London since the end of the second World War.

Sir Martin said the next few days would be filled with sorrow but he expressed the hope that the sorrow would be tempered by memories of happiness and he stressed the importance of hearing personal testimonies about those who died.

“They are an integral part of the evidence before the inquiry. They are a reminder of its purpose,” he said.

The second tribute on Monday was to Denis Murphy, whose mother Anne moved to England from Limerick in the 1950s; he lived on the 14th floor of Grenfell Tower. His sister Anne Marie said that, as the fire spread swiftly upwards in the early hours of June 14th, Mr Murphy spoke by phone to his brother Tim, who tried to reassure him that he would be rescued.

“We as a family feel strongly that there is no reason in the world why anyone should have death forced upon them in such a horrific way. The day Denis died a part of all of us died too. To us Denis was an inspiration and we feel lucky and blessed that he was part of our family. His warmth and love will stay with us forever,” she said.

The first phase of the inquiry will focus on the sequence of the events on the night of the fire, including fire safety and prevention measures and details of how the fire started and spread and how residents were evacuated.

The second phase will look at events before the fire, including decisions over the refurbishment of the tower block with exterior cladding which has been widely blamed for the swift spread of the fire.