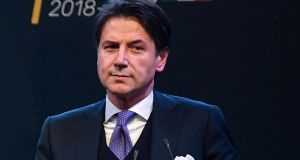 Giuseppe Conte, a civil lawyer and academic, who has been proposed by the anti-establishment Five Star Movement and the far-right League as Italy’s new prime minister.

Italy’s anti-establishment Five Star Movement and the far-right League have proposed Giuseppe Conte, a civil lawyer and academic, as the country’s new prime minister to lead their populist government.

Luigi Di Maio, Five Star leader, and Matteo Salvini, the League leader, told Sergio Mattarella, Italy’s president, in separate meetings at the Quirinal Palace on Monday that they had chosen Mr Conte as their compromise candidate for prime minister.

It will now be up to Mr Mattarella to decide whether to offer Mr Conte a mandate to form the government. If he does, the new government could be in place within days.

Mr Di Maio confirmed that they had tapped Mr Conte, a 53-year-old little-known professor, after meeting Mr Mattarella, and dismissed concerns that he would be a powerless technocrat.

After sealing a deal on a joint platform to run the country, replete with measures that have unsettled EU policymakers and investors in Italian securities, Mr Di Maio and Mr Salvini spent the weekend trying to find a compromise choice to implement their plan.

Mr Di Maio, who led Five Star to win 33 per cent of the vote in Italy’s general election in March, had long held out hope that he would become prime minister, but had always been blocked by Mr Salvini.

But Mr Di Maio is still expected to be part of the government, as minister of labour and economic development, allowing him to oversee the disbursement of a €780-per-person basic income to the poor, which is Five Star’s signature policy.

Meanwhile, Mr Salvini is set to become interior minister, which would put him in charge of a crackdown on immigration, including plans to deport up to 500,000 illegal immigrants, which was central to his campaign.

Giampiero Massolo, chairman of Fincantieri, the state-owned shipbuilding company, and a veteran diplomat, is expected to be foreign minister in the new government, while the post of finance minister is still very much up for discussion, with Giancarlo Giorgetti, a key aide to Mr Salvini, seen to be in pole position.

If Mr Mattarella approves the choice of prime minister on Monday evening, a succession of appointments could swiftly follow.

The ministers could be sworn in before the end of the week, replacing the incumbent centre-left administration led by Paolo Gentiloni. The final hurdle for the Five Star-League government would be a vote of confidence in both houses of parliament.

The establishment of a populist government in Rome has already raised alarm bells across EU capitals.

Bruno Le Maire, the French finance minister, issued a blunt warning to Rome on Sunday, saying that Italy needed to respect EU budget rules or the single currency would be in jeopardy. – Copyright The Financial Times Limited 2018