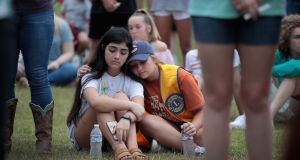 One of the students killed in the Santa Fe school shooting reportedly turned down romantic advances from Dimitrios Pagourtzis, the suspect in the deaths of 10 people and wounding of at least another 10.

Shana Fisher’s mother, Sadie Rodriguez, told the Associated Press Shana “finally stood up to him and embarrassed him”. Speaking to the Los Angeles Times, Ms Rodriguez said: “A week later he opens fire on everyone he didn’t like.”

Authorities named the victims on Saturday. The Pagourtzis family said in a statement they “shared the public’s hunger for answers as to why this happened”.

The lawyer who issued the statement told the AP he had not heard about any interaction of the sort described by Ms Rodriguez. Nicholas Poehl also said he had spent time disputing false rumours about Pagourtzis’s personal life.

Texas lieutenant governor Dan Patrick told CNN’s State of the Union: “In terms of any true motive, any more information, police are still investigating the journals that he’s written, looking through computers and telephones I’m sure.”

Mr Patrick deflected questions about gun law reform, preferring to call for owners to lock up their weapons. The shotgun and revolver Pagourtzis is alleged to have used were reportedly owned legally by his father. Appearing on ABC’s The Week, Mr Patrick said he supported background checks for gun purchases but said: “Gun regulation starts at home.”

“We need our teachers to be armed,” he told CNN, adding that a teacher in Santa Fe, “a marine”, might have been able to prevent the shooting had he had a weapon. “When you’re facing someone who’s an active shooter,” the lieutenant governor said, “the best way to take that shooter down is with a gun. But even better than that is four to five guns to one.”

Mr Patrick misquoted the the US constitution, telling ABC teachers were “part of that well run militia”. In fact, the second amendment reads: “A well regulated Militia, being necessary to the security of a free State, the right of the people to keep and bear Arms, shall not be infringed.”

Mr Patrick also repeated his call for entrances to schools to be reduced and securitised. “We can harden those targets and make it more difficult,” he told CNN.

ABC also interviewed Fred Guttenberg, the father of one of 17 people killed in the Parkland school massacre in Florida in February who now runs Orange Ribbons for Jaime, a group named for his 14-year-old daughter.

Mr Guttenberg said Mr Patrick had made “the most idiotic comments I’ve ever heard regarding gun safety” and said the lieutenant governor “should be removed from office for his failure to want to protect the citizens of Texas”.

“I am raging right now,” he said. “I’m here this weekend at what was supposed to be my daughter’s dance recital where they’re honouring my daughter’s memory instead of having my daughter dance. And for that man to make those moronic comments? Unacceptable.”

Houston police chief Art Acevedo told CBS’s Face the Nation that John Barnes, a retired officer and school guard who confronted the suspect, was “in very serious condition but he’s stable. I can tell you that we expect him to recover”. Acevedo also repeated criticism of legislative inactivity first made in a Facebook post on Friday.

“People at the state level and the federal level in too many places in our country are not doing anything other than offering prayers,” he said. “We need to start using the ballot box and ballot initiatives . . . to see that the will of the people . . . is actually carried out.”

Pagourtzis appeared in court in Galveston on Friday, charged with capital murder. Because he is under 18, if found guilty he faces life imprisonment rather than the death penalty.

The shooting began during first period on Friday. One mother used Facebook to describe what she said her daughter went through.

“She’s moving from [hiding place to hiding place] as the gunman continues to fire into the classroom,” Deedra Van Ness wrote. “She is now covered in dust from the bullets hitting the walls around her. Kids are scrambling trying to hide / escape and she … finally runs for the supply closet where she and 6 other kids hide.”

Van Ness continued: “As they are moving heavy items in front of the door, the gunman screams … Surprise M*****F****** and begins shooting into the closet. The gunman hits 3 of the 8 kids in the closet … killing 2 of them instantly. He leaves to chase other kids who ran out of the room and they hear more gun shots. Then he comes back.”

Van Ness’s daughter, Isabelle, lay “on the floor for over 30 min[utes] next to her deceased classmates”, her mother wrote, as the gunman continued his spree.

The Pagourtzis family statement said: “We are gratified by the public comments made by other Santa Fe High School students that show Dimitri as we know him: a smart, quiet, sweet boy . . . what we have learned from media reports seems incompatible with the boy we love.”

Eight students and two substitute teachers were killed. One of the students, Sabika Sheikh, was from Pakistan. The Islamic Society for Greater Houston said services for the 17-year-old would take place on Sunday. Her body would be returned to her family in Karachi, the society said.

The Houston Texans NFL team confirmed that its star defensive end, JJ Watt, would pay for all the funerals. On Saturday night, the stands were packed as the Santa Fe high school baseball team took the field for a playoff game in suburban Houston. One of the team’s pitchers sustained a minor gunshot wound to the head. – Guardian