Man killed by exploding electronic cigarette in US 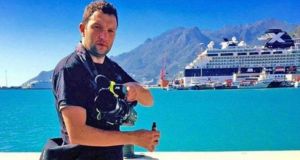 Tallmadge D’Elia (35) was at his home in St Petersburg, Florida, on May 5th when his e-cigarette exploded. Photograph: Facebook

An electronic cigarette exploded and killed a man in Florida this month, the authorities said, in what appears to be the first death attributed to vaping products in the United States.

The man, Tallmadge D’Elia (35) was at his home in St Petersburg, Florida, on May 5th when his e-cigarette exploded, according to William A Pellan, director of investigations at the medical examiner’s office for Pinellas County.

He confirmed that the cause of the accidental death was a “projectile wound to the head,” and that D’Elia had suffered burns on about 80 per cent of his body. It appeared that the explosion had started a fire in the bedroom where he was found.

One of the pieces removed from his head featured the logo of Smok-E Mountain Mech Works, which is based in the Philippines. The company’s owner did not immediately respond to an email requesting comment Wednesday, but a representative told ABC Action News that its devices do not explode, adding that the problem may have stemmed from the battery.

Smok-E Mountain makes a particular type of e-cigarette called a mechanical mod. Compared with more common types of e-cigarettes, mechanical mods typically give users more direct access to the battery and do not use inner circuitry to regulate the voltage.

“Today, the products are overwhelmingly used by hobbyists,” Gregory Conley, the president of the American Vaping Association, said of mechanical mods. He added that the e-cigarettes used by most people who vape have more built-in safety features.

“Millions of adults use vapor products regularly and tragic events like this are rare,” Mr Conley added. “The vast majority of vaping devices on the market carry the same fire risk as other products that use lithium-ion batteries, such as cellphones and laptops.”

A report from the US Fire Administration last year reviewed 195 reports of e-cigarette-related fires and explosions from 2009 to 2016, none of which resulted in deaths. It pointed specifically to electronic cigarettes that use lithium-ion batteries as a “new and unique hazard” because those are more prone to explosion.

“No other consumer product places a battery with a known explosion hazard such as this in such close proximity to the human body,” the report said. “It is this intimate contact between the body and the battery that is most responsible for the severity of the injuries that have been seen. While the failure rate of the lithium-ion batteries is very small, the consequences of a failure, as we have seen, can be severe and life-altering for the consumer.”