Brexit: No 10 shoots down Leadsom’s idea for ‘managed no-deal’ 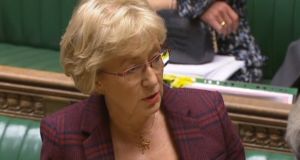 Leader of the House of Commons Andrea Leadsom said on Thursday the EU’s contingency plans, announced this week, showed that a “managed no-deal” did not necessarily mean there would be no agreement at all if Mrs May’s deal were to be rejected.

“This is all speculation, but what I am looking at is trying to find an alternative that, in the event we cannot agree to this deal, there could be a further deal that looks at a more minimalist approach that allows us to leave with some kind of deal and some kind of implementation period that avoids a cliff edge, that avoids uncertainty for businesses and travellers and so on,” Ms Leadsom told the BBC.

The prime minister’s official spokesman said the focus should be on approving Mrs May’s deal, adding that no alternative arrangement could be negotiated. “This is not something that is available. The EU has been very clear that there is no withdrawal agreement available that does not include a backstop,” he said.

A cross-party group of MPs has tabled an amendment to a finance Bill to rule out a no-deal Brexit unless parliament approves it. Labour’s Yvette Cooper said the amendment, which would prevent the government from keeping tax law working if there was a no-deal Brexit, was necessary to put MPs in control of the process.

“The risks to our economy and security from no deal are far too high and it would be irresponsible to allow it to happen. I do not believe parliament would support no deal and ministers should rule it out now.

“But if the government won’t rule it out, then parliament needs to find opportunities to stop the country reaching the cliff edge by accident – starting with the finance Bill in the first week back, then looking at every other legislative opportunity, too,” she said.

As MPs began a recess that will last until January 7th, work and pensions secretary Amber Rudd became the first serving cabinet minister to cite a second referendum as a possible way out of parliamentary deadlock over Brexit. She said arguments for another referendum would come into play if MPs rejected Mrs May’s deal and failed to back any other options.

“I have said I don’t want a people’s vote or referendum in general but if parliament absolutely failed to reach a consensus I could see there would be a plausible argument for it,” she told Robert Peston on his ITV show.

“Parliament has to reach a majority on how it is going to leave the EU. If it fails to do so, I can see the argument for taking it back to the people again as much as it would distress many of my colleagues.”