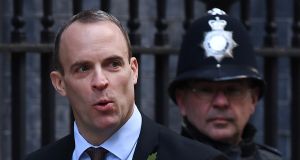 For a politician who likes to describe himself as a “details man”, Dominic Raab’s account of the details of his negotiations with the European Union is outstandingly unreliable. Almost everyone involved during the Conservative leadership candidate’s short stint as Brexit secretary last year maintains that his version of events is simply untrue.

In an interview with Katy Balls in this week’s Spectator, Raab claimed that he had been on the brink of a breakthrough on the backstop after a dinner in London with Simon Coveney but the deal was blocked by Theresa May’s de facto deputy, David Lidington.

“It wasn’t ruled out by Coveney, it was ruled out by Varadkar. The only thing that happened in between is that he met David Lidington. It’s clear what happened,” he said.

Michel Barnier’s team had already rejected Raab’s proposal to allow Britain to trigger a review mechanism for the backstop within a few months of it coming into effect. But in Brussels, his gambit was perceived as part of a broader pattern of negotiating in bad faith, with an eye on his future political prospects.

EU negotiators initially welcomed Raab as a smarter and more focused interlocutor than his predecessor David Davis. Nobody in Brussels doubted the former lawyer’s intelligence but they soon concluded that he was short-tempered, insecure and unreliable.

“He would say one thing inside the room and say something else outside two minutes later. Nobody trusted him,” one senior EU official said.

What Tennessee Williams called “a powerful and obnoxious odour of mendacity” also surrounds Boris Johnson, Raab’s chief rival for the Brexiteer vote in the leadership contest. So Raab’s dodgy account of his negotiations with the EU may not prove fatal to his chances in a contest where everyone appears willing to suspend their disbelief.

When it comes to the backstop, for instance, most of the other dozen or so leadership candidates sound just as confident as Raab about their chances of renegotiating it. Foreign secretary Jeremy Hunt promises to go to Brussels with a new negotiating team including representatives of the DUP and the European Research Group (ERG) of hardline Brexiteers.

Johnson wants to renegotiate the backstop to introduce a time limit or a unilateral exit mechanism. And housing minister Kit Malthouse is one of a number of candidates who want it to be replaced by “alternative arrangements” to keep the Border open.

In an interview with the New York Review of Books this week, Michel Barnier restated the EU’s commitment to explore alternative arrangements after Britain ratifies the withdrawal agreement. But he warned that such arrangements could not be put in place immediately and insisted that the backstop must remain in place as an insurance policy.

“They must be fully operational. I was the French minister of agriculture – how do you control a single cow or a truck load of pork? You need technology. You need technical infrastructure to do that. And this takes time,” he said.

In an invaluable new paper Sam Lowe looks in detail at the kind of alternative arrangements that would be needed to keep the Border free of physical infrastructure and associated checks after Brexit.

He points out that, even if efficient systems of online predeclaration of goods, trusted trader schemes and tracking technology are developed, some checks will still be necessary away from the Border. And any system would require an intensification in anti-smuggling measures near the Border, either through intelligence-led policing or electronic surveillance.

Any such system would require the consent of the people most directly affected, the businesses and communities close to the Border. But as Lowe observes, the people of Northern Ireland are effectively excluded from a discussion about the Border that is conducted almost entirely within Westminster.

“Whereas the backstop, or a close, highly integrated economic relationship between the EU and UK, removes the need for physical infrastructure or associated checks by ensuring no new regulatory or customs border is created, technical solutions are premised on the acceptance of a new border, combined with efforts to ensure it is as unintrusive as possible,” he says.

“Any solution that assumes that a border community that is predominantly Irish nationalist, and against leaving the EU, will readily accept the existence of a new customs and regulatory divide faces an uphill struggle.”