Corbyn in Dublin says he could renegotiate Brexit as prime minister 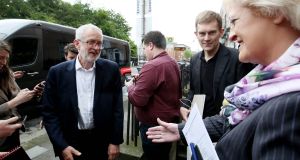 Jeremy Corbyn, the leader of Britain’s Labour Party, has suggested he could renegotiate the UK’s exit deal from the EU as prime minister, despite the EU repeatedly ruling out any re-opening of the withdrawal agreement.

Speaking in Dublin, Mr Corbyn also said any second Brexit referendum should not be a repeat of the 2016 vote in the UK but instead a referendum on a new deal with Europe.

Mr Corbyn made his comments to journalists on Wednesday evening prior to a meeting in Dublin with Ictu general secretary Patricia King.

Asked if a second referendum was now the only way forward for the UK, Mr Corbyn said: “The referendum would be on a negotiated deal or alternatives to that. It’s not a re-run of 2016.”

When asked if it would not be a second “in-out” referendum, Mr Corbyn said: “It would be on the basis of whatever we have succeeded in negotiating.”

Asked if he thought the situation was moving closer to no deal, he said: “The Tory party will have to speak for itself, but of the candidates that have nominated themselves so far, they appear to be of the view that there should be a no-deal Brexit. I’m absolutely opposed to that.”

Asked how he could negotiate the agreement when the EU had repeatedly said the withdrawal agreement was not up for renegotiation, he said: “Well, we’ve just had the EU elections, there will obviously be a new commission and we’ll be discussing this with the Taoiseach tomorrow.

“Indeed, I have discussed this before with officials including [chief Brexit negotiator] Michel Barnier in the European Union, and we think that the important thing is to get an agreement with the European Union that prevents a no-deal Brexit.

“I do not want Britain to become some kind of tax haven on the shores of Europe. I want us to have a close relationship with Europe in the future. After all, jobs on both sides of the channel, and of course in Ireland as well, depend on that trading relationship.”

Mr Corbyn is in Ireland for meetings with trade union leaders, as well as Taoiseach Leo Varadkar and Opposition leaders. He will also pay a visit to President Michael D Higgins.

“The Labour Party is of the position that we should be quite prepared to put this to a public vote subsequently.”