Countdown for Theresa May after June meeting with Graham Brady 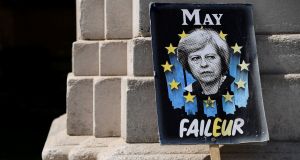 An anti-Brexit placard depicts British PM Theresa May: She will meet 1922 Committee chairman Graham Brady after the second reading of the Withdrawal Agreement Bill in the first week in June. Photograph: Toby Melville

Theresa May’s agreed statement with 1922 Committee chairman Graham Brady on Thursday confirmed that she will soon become the fourth successive Conservative prime minister to be destroyed by the issue of Europe.

May will meet Brady after the second reading of the Withdrawal Agreement Bill (WAB) in the first week in June to agree a timetable for her departure regardless of the Bill’s fate.

Almost everyone at Westminster expects the government to lose the second reading vote, dooming the Bill and May’s Brexit deal and triggering an immediate Conservative leadership contest. But as international development secretary Rory Stewart observed on Thursday, nobody is able to prophesy what is going to happen with Brexit.

“The reality is that it seems to be checkmate in every direction. My instinct is we’ve just got to get this through by hook or by crook, there’s got to be some way of driving this thing through because this is not good for business, it’s not good for citizens,” he said.

In the more likely event that the Bill falls at its second reading, what to do about Brexit will be at the centre of the Conservative leadership contest

There are just two ways that the prime minister could defy expectations to keep the Bill alive past its second reading, thus sustaining the hope that her legacy will be more than a failure to deliver Brexit. The first rests on Labour either supporting the Bill in its second reading or acquiescing in its passage to the committee stage.

Jeremy Corbyn’s spokesman said on Wednesday that the party could not support the Bill unless a broader agreement on Brexit emerges from its current talks with the government. But he declined six times to rule out abstaining in the vote on the second reading, feeding speculation that Labour could stand back and allow the vote to pass.

In the Commons on Thursday, Brexit secretary Keir Starmer sought to remove any doubt about Labour’s position.

“Let me make clear that Labour opposes the idea of passing the Withdrawal Agreement Bill without an agreed deal. That would put the cart before the horse, and Labour will therefore vote against the Bill’s second reading,” he said.

May’s second option for winning a vote on the second reading is to insert into the text of the Bill some reassurance on the backstop that could persuade more Conservative Brexiteers and perhaps even the DUP to support it.

Brady has proposed amending the Bill to put into British law a commitment to ensure that “alternative arrangements” for the Border are in place before the end of the post-Brexit transition period.

The prime minister may be willing to take that chance if it keeps the WAB and her Brexit deal alive, not least because it will be for her successor to untangle the diplomatic mess with Brussels. If the Bill does pass its second reading, the government has said it will accept any amendments that win a majority in the Commons.

This could leave the Bill freighted with impossible or even contradictory amendments, leaving the next prime minister with a fresh negotiation with Brussels.

In the more likely event that the Bill falls at its second reading next month, what to do about Brexit will be at the centre of the Conservative leadership contest. Regardless of any promises made to win the prize, the next prime minister will face the same challenges as May does, both at Westminster and in Brussels.

And when the October 31st deadline approaches, MPs will face the same choice as today, between no deal, no Brexit and the withdrawal agreement.