AN Wilson describes The Victorians as ‘a dozen pompous schoolboy compositions’ 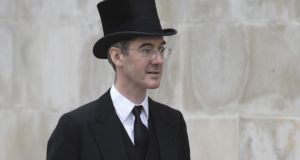 Jacob Rees-Mogg: the MP is often referred to as the honourable member for the 18th century, ‘a nod to those funny clothes he wears, along with pretending not to know’ any pop songs. Photograph: Colin McPherson/Corbis/Getty

Adoring colleagues on the right of the British Conservative Party hang on Jacob Rees-Mogg’s every word in the House of Commons, considering him one of Brexit’s foremost rhetoricians.

But as his new book about eminent Victorians has been published, the literary world has begged to differ, with critics gleefully mauling the title as “staggeringly silly” and “absolutely abysmal”.

The Victorians: Twelve Titans Who Forged Britain, which appears this week to coincide with the 200th anniversary of the birth of Queen Victoria, features figures including the British prime ministers Robert Peel, William Gladstone and Benjamin Disraeli.

AN Wilson wrote in the Times that Rees-Mogg’s effort was ‘anathema to anyone with an ounce of historical, or simply common, sense’

The MP for North East Somerset and chair of the European Research Group parliamentary group reportedly spent about 300 hours writing the work, for which he has so far received £12,500, or about €14,250, from Penguin Random House.

But its early readers have not been persuaded that the project was time well spent. The historian AN Wilson, whose book The Victorians was published in 2002, wrote in the Times that Rees-Mogg’s effort was “anathema to anyone with an ounce of historical, or simply common, sense”. Describing the work as “a dozen clumsily written pompous schoolboy compositions”, he said it claimed to be a work of history but was in fact “yet another bit of self-promotion by a highly motivated modern politician”.

On the chapter about the conquest of Sindh, in what is now Pakistan, by the 19th-century British general Charles Napier, Wilson wrote: “At this point in the book you start to think that the author is worse than a twit. By all means let us celebrate what was great about the Victorians, but there is something morally repellent about a book that can gloss over massacres and pillage on the scale perpetrated by Napier.”

Writing in the Guardian, Kathryn Hughes described the book as “an origin myth for Rees-Mogg’s particular rightwing vision of Britain”. “In parliament, Rees-Mogg is often referred to as ‘the honourable member for the 18th century’, a nod to those funny clothes he wears, along with pretending not to know the name of any modern pop songs,” she wrote.

“What a shame, then, that he has not absorbed any of the intellectual and creative elegance that flourished during that period.”

She criticised the lack of women in the book. “In mythology, six of the 12 Titans, the children of Uranus and Gaea, were female; not here,” Hughes wrote. “The only female who appears in the book is Queen Victoria herself, who, Rees-Mogg assures us, ‘became no less of a woman when she learned to rely upon Albert as a partner and to trust him’.”

Dominic Sandbrook described the book as abysmal and soul-destroying. Writing in the Sunday Times, he said: “No doubt every sanctimonious academic in the country has already decided that Rees-Mogg’s book has to be dreadful, so it would have been fun to disappoint them.

“But there is just no denying it: the book is terrible, so bad, so boring, so mind-bogglingly banal that if it had been written by anybody else it would never have been published.”

Before I started, the prospect of Rees-Mogg in Downing Street struck me as ridiculous. But if this is what it takes to stop him writing another book, we should seriously consider paying the price

In a rare positive response, quoted by Penguin to promote the book, the conservative historian Andrew Roberts described Rees-Mogg’s book as “a full-throated, clear-sighted, well-researched and extremely well-written exposition of the Victorians and their values”.

“Rees-Mogg’s choice of a dozen Victorian luminaries allows him to defend an era too often ignored or written off in British history, and to compare it to our modern day in a way that readers will find gripping but also chastening.”

But in the Observer, Kim Wagner, a senior lecturer in British imperial history at Queen Mary University of London, joined in the general mauling. “The book really belongs in the celebrity autobiography section of the bookstore,” he wrote. “At best, it can be seen as a curious artefact of the kind of sentimental jingoism and empire-nostalgia currently afflicting our country.”

If the book’s critical savaging fails to impede Rees-Mogg’s further political rise, Sandbrook’s review does offer a silver lining to those who find him objectionable. “Before I started, the prospect of Rees-Mogg in Downing Street struck me as a ridiculous idea,” he wrote. “But if this is what it takes to stop him writing another book, than I think we should seriously consider paying the price.” – Guardian