UK Labour leader Jeremy Corbyn says he and Taoiseach Leo Varadkar had a "very good discussion" over the proposal of a customs union between the UK and EU post-Brexit. 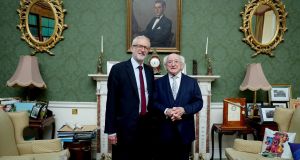 British Labour leader Jeremy Corbyn is meeting Taoiseach Leo Varadkar on Thursday morning for discussions about Brexit as part of a low-key visit to Dublin.

Mr Corbyn briefly answered journalists’ questions after arriving at the headquarters of the Irish Congress of Trade Unions on Wednesday evening, but has otherwise been shielded from the media.

A statement issued by the Government after the meeting said Mr Varadkar had “a good meeting” with Mr Corbyn. “The Taoiseach and Mr Corbyn held detailed discussions for an hour and a half on Northern Ireland, Brexit, and the current political situation in Westminster.

“Discussions focused principally on the need to restore power-sharing in Northern Ireland and the importance of ongoing engagement with all political parties in the North. These talks continue this week in Belfast involving the Tánaiste and the Secretary of State for Northern Ireland.

“They also considered Brexit, with both sides sharing serious concerns about a no-deal scenario and its inherent dangers, including the possibility that the UK may end up in a no deal situation by default unless alternatives are pursued.”

The statement added that the Taoiseach and Mr Corbyn also discussed the importance of avoiding any return of a hard Border on the island of Ireland and pledged to stay in touch.

A Government spokesman said earlier there would be no opportunity for the media to question Mr Corbyn after his meeting with the Taoiseach. Asked if this was at the request of Mr Corbyn, the spokesman would only say that this is what had been agreed between the two sides.

It is usual for political leaders visiting Government Buildings to hold a press conference or other opportunity for the media to ask them about their trip and the discussions they have had.

Meanwhile, in a statement on Thursday morning, a spokesman for Áras an Uachtaráin said: “The President and Mr Corbyn had a lengthy and comprehensive meeting at which they discussed a range of current issues including Irish-UK relations, Brexit, the future of the European Union and Northern Ireland. The President and Mr Corbyn have known each other for several decades.”

On Wednesday night, Mr Corbyn said that he would seek to renegotiate Brexit to get a better deal for the UK that avoided a no-deal outcome, even though the EU has been clear that the Withdrawal Agreement will not be reopened.

In the past, Labour’s shadow Brexit secretary Keir Starmer has accepted that the agreement will not be reopened, but has suggested that the political declaration - the basis for the future trading relationship between the EU and the UK - could be rewritten to reflect Labour’s desire for a customs union-type arrangement. There is broad agreement in the EU for this.

Mr Corbyn also suggested that any second Brexit referendum should not be a repeat of the 2016 vote in the UK but instead a referendum on a new deal with Europe.

Asked if a second referendum was now the only way forward for the UK, Mr Corbyn said: “The referendum would be on a negotiated deal or alternatives to that. It’s not a rerun of 2016.”

Asked if it was not a second “in-out” referendum, Mr Corbyn said: “It’s not a rerun of 2016, it would be on the basis of whatever we have succeeded in negotiating.”

The Labour leader also met his Irish counterpart Brendan Howlin on Wednesday night, as well as other opposition figures. Again, he did not meet the media after these meetings, though Mr Howlin’s office issued a statement afterwards, describing the meeting as “constructive”.

1 David Trimble: After the big dinner in Oslo, somebody said why don’t we party together?
2 Covid-19: ‘Green list’ may shorten as Cabinet looks to tighten travel restrictions
3 Coronavirus: Warning against blame game as 46 more cases are confirmed
4 Maureen Dowd: The US president and the damage done
5 John Hume, architect of peace process, dies aged 83
Real news has value SUBSCRIBE