Tens of thousands march in Baghdad to demand US expulsion 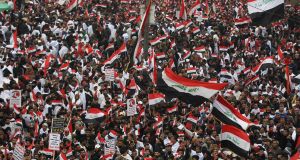 Thousands of Iraqis demonstrate in the heart of Baghdad on Friday to demand the ousting of US troops from the country. Photograph: Ahmad Al-Rubaye/AFP via Getty Images

Tens of thousands of men, women and children poured into Baghdad on Friday for a “million man” march demanding the expulsion of the 5,000 US troops from Iraq. Marchers brandished Iraqi flags and signs in Arabic and English proclaiming “Leave to Live”, “Stop Stealing our National Wealth”, and “No doubt, no doubt, US gonna go out”.

Main roads were barricaded and cement blocks surrounded the fortified Green Zone hosting the US and other embassies, parliament and government offices.

The call for the march, the largest in recent years, was issued by nationalist Shia cleric Muqtada al-Sadr whose party is the largest in parliament to rekindle public outrage over the US assassination near Baghdad of Iranian Quds Force commander Qassem Suleimani and Iraqi militia leader Abu Mahdi al-Muhandis, whose fighters joined the Iraqi army and the US-led coalition in the campaign against Islamic State.

The march has exerted pressure on caretaker prime minister Adel Abdel Mahdi, who resigned in November, and parliament to formally rescind the 2014 agreement for the redeployment of US troops. Iraqis say they have violated their mandate to battle Islamic State by attacking Iraqi militias and Suleimani, who had been invited to Iraq by Abdel Mahdi to promote de-escalation of tensions between Iran and Saudi Arabia.

Sadr instructed participants to be peaceful, refrain from displaying religious affiliations, and avoid chanting slogans that would offend any but the occupiers. They massed near Baghdad University to avoid competing with anti-government gatherings in Tahrir Square.

Thousands have taken to the streets , sometimes with Sadr’s support, since October 1st to demand an end to corruption, mismanagement, the Shia-fundamentalist regime, and the sectarian form of governance imposed by the US.

Amnesty International reports that during widespread demonstrations 600 Iraqis have died from live fire, as well as deadly smoke and tear gas grenades used by riot squads.

Sadr issued his call from the Iranian Shia holy city of Qom where he has been studying with Shia scholars to burnish his clerical credentials. As Qom is seen as safe from the kind of US drone strikes that killed Suleimani and Muhandis, he recently met there with rival pro-Iranian militia leaders to win support for the march.

While these figures fled Iraq for Iran during Baathist rule and returned during the US occupation, Sadr – whose father and father-in-law were murdered by the Baathists for Shia sectarian activity – remained in Iraq, condemned the US war, and formed the Mahdi Army to fight US forces.

Meanwhile, Iraqi president Barham Salih, a Kurd, has been castigated by Shia leaders for meeting US president Donald Trump on the sidelines of the World Economic Forum in Davos.

During his Davos address, Salih said: “The Iraqi parliament’s vote to expel US troops was not a sign of enmity. It was just a reaction to what many Iraqis saw as a violation of their country’s sovereignty, an issue that will be addressed through dialogue.”

A statement from the Iraqi presidency said the two heads of state discussed “reducing foreign troops in the country and the importance of respecting the demands of Iraqi people to preserve the country’s sovereignty”.

In response to the parliament’s resolution, Trump threatened harsh sanctions. Kurds and Sunnis have been wary of demands for US withdrawal as they consider the US presence a counterweight to Iranian influence in the country.