Dispute resolution mechanism may buy time for diplomacy with Tehran

Britain, France and Germany fear Trump will deprive Iran of incentive to compromise 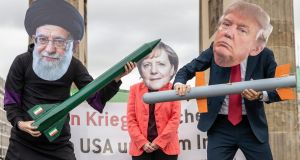 To succeed, the Europeans must persuade Donald Trump to ignore the hawks around his administration who believe that even more brutal sanctions can topple the Iranian regime. Photograph: Omer Messinger

In triggering the dispute resolution mechanism of the Iran nuclear deal, Britain, France and Germany (the E3) are under no illusions about its likely impact. They know that Tehran will not agree to return to compliance with the Joint Comprehensive Plan of Action (JCPOA) as long as the United States continues to impose crippling sanctions on Iran.

And they know that China and Russia, who are also parties to the JCPOA, will not support any move to escalate the issue by returning it to the United Nations Security Council where the sanctions lifted in return for Iran’s halting of its nuclear programme could be reimposed. Restoring those sanctions would have little impact in any case because the extraterritorial sanctions imposed under Washington’s policy of “maximum pressure” are so comprehensive they are strangling Iran’s economy.

Under the 2015 deal, Iran agreed to limit its nuclear programme in return for the lifting of sanctions imposed by the UN, the EU and the US. When Donald Trump withdrew from the deal in 2018 and imposed tougher sanctions, EU states initially tried to find a way of circumventing the US measures to allow Iran to enjoy some economic benefits.

But the US sanctions regime was so punitive, effectively blocking any European firm that does business with the US from operating in Iran, that no remedy was found. Last May, US sanctions tightened further and Tehran started reducing its compliance with the deal, taking five successive steps towards lifting restrictions on its nuclear programme.

The first two steps were essentially technical breaches but the Europeans believed that subsequent steps involved irreversible moves towards advancing its enrichment programme. Britain, France and Germany were ready to trigger the dispute resolution mechanism last year but China asked them to delay.

The JCPOA allows for a dispute resolution process that could take months and the E3 are hoping it will buy time for a parallel diplomatic process to unfold. Ideally, this would include Washington in an attempt to find a new iteration of the JCPOA that satisfies some US concerns about Iran’s behaviour and ensures that Tehran can reap the economic reward for halting its nuclear programme.

To succeed, the Europeans must persuade Donald Trump to ignore the hawks around his administration who believe that even more brutal sanctions can topple the Iranian regime. The E3 fear that Trump’s policy of maximum pressure could leave a wounded Iran free to pursue its nuclear enrichment programme free of any outside inspections and with no incentive to compromise.