New Zealand volcano: Dozens still in hospital a month on 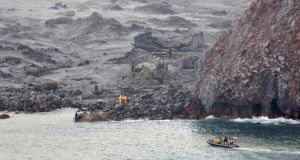 More than a dozen people remain in New Zealand hospitals with life-threatening injuries a month on from the fatal eruption of Whakaari White Island. Seventeen people have been confirmed dead following the December 9th disaster, with a further two people missing presumed dead. Acting district commander Insp Warwick Morehu of New Zealand police said the search for two missing victims was suspended on December 24th but staff were “available and ready to respond” if new information emerged.

“Authorities have not returned to the island since the recovery mission was completed,” Mr Morehu said, adding that officers remained in close contact with victims’ families and local iwi (tribes).

“The police investigation on behalf of the coroner is continuing, in parallel with the WorkSafe New Zealand investigation.” A ban placed on the island by Ngati Awa iwi was lifted late in December, although the ministry of primary industries has warned people not to collect seafood from within a 1km radius of the island.

Four New Zealand hospitals have continued to treat 13 victims of the Whakaari disaster, with eight remaining at Middlemore, two at Waikato, two at Hutt Valley hospital and one at Christchurch hospital. Four of those patients remained in a critical condition, the ministry of health said, with three in intensive care at Middlemore hospital in Auckland. Middlemore’s chief medical officer, Dr Peter Watson, said the eruption was “extraordinarily challenging” and staff were only beginning to come to terms with what had happened.

“We had never experienced multiple serious burns on this scale,” he said. “I think it has been a huge effort by the country and the entire health system. It’s really pleasing that the patients are now getting to a point of recovery where they could leave hospital.”

Burns surgeons brought in from the US and Australia, as well as around New Zealand, meant some of Middlemore’s overworked staff were able to spend Christmas with their families, and the hospital was preparing to repatriate some of White Island’s victims to their families in the northern hemisphere. “The problem is the visitors injured are from a long way away – getting to the northern hemisphere is 24 hours and they need medical escorts and teams,” Dr Watson said. “We’re trying to ensure they’re well enough to travel in commercial flights, but also there are many family groups and couples here, so it’s about keeping families together as well because it’s the family support which is really important in terms of recovery.” Dr Watson said his team would be busy with White Island victims for at least the next two months, with medical transfers hoped to begin at the end of January. The burns ward was still at capacity, but New Zealanders remained generous even a month on, stopping by with food, games and electronic equipment for Whakaari patients and staff treating them. Donor skin purchased from the US and Australia was used as a temporary skin graft and functioned as a kind of live “dressing”, Dr Watson said. This was now being replaced by victims’ own skin, but was a slow process as skin had to be given time to grow and the operations were delicate and complex. Thirteen White Island victims repatriated in December remain in burns units in Australian hospitals.–Guardian