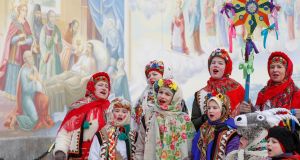 Tensions in the Orthodox Church have loomed over this year’s traditional Christmas celebrations in Ukraine and Montenegro. Photograph: Valentyn Ogirenko/Reuters

The Russian Orthodox Church has accused the West of political meddling in religious affairs, as tension soared in Montenegro over a new law and Ukraine marked one year since its historic spiritual split from Moscow.

Police in Montenegro kept watch over followers of the rival Serbian and Montenegrin Orthodox Churches on Monday night as they celebrated Christmas Eve according to their calendar, amid a wave of street protests and fears of clashes.

Thousands of Montenegrins have rallied in response to warnings from the Serbian Orthodox Church that the state could seize its property under a law that was denounced by Serbia and its ally Russia after being passed late last month.

The friction comes a year after the Ecumenical Patriarch of Constantinople – traditionally “first among equals” in the Orthodox world– recognised the independence of the Orthodox Church of Ukraine from Moscow, formally ending centuries of Russian domination of religious affairs in Ukraine.

“The Orthodox Church has found itself facing unprecedented interference from external forces,” Patriarch Kirill, the head of the Russian Orthodox Church, said on Tuesday.

“Significant political pressure is being exerted on a number of local churches. All this is connected with the notorious events in Ukraine,” he added, while blaming “the interference of foreign political forces” for the upheaval.

Hundreds of parishes across Ukraine have switched from the local arm of the Russian Orthodox Church to the new Orthodox Church of Ukraine. The new church has secured recognition from the Ecumenical Patriarchate, the Church of Greece and the Patriarchate of Alexandria – prompting Moscow to sever ties with those churches.

Longstanding disputes between Ukraine’s churches intensified after its pro-western revolution in 2013-14 and the Kremlin’s decision to annex Crimea and foment a war in eastern Ukraine – where the local branch of the Russian Orthodox Church was widely seen as a supporter of the Moscow-led separatists.

While Ukraine’s leaders and many of its people hailed the establishment of an independent church as a boost to national sovereignty, Russia condemned the move as part of US-led efforts to weaken its influence.

Moscow and its ally Belgrade have lambasted Montenegro over a new law obliging religious communities to prove that their current property was in their possession before the country was folded into a Serb-dominated kingdom in 1918.

Advocates say the law will help cement pro-western Montenegro’s statehood and bolster the small Montenegrin Orthodox Church. The much larger Serbian Orthodox Church calls it a government bid to seize hundreds of its buildings.

Serb nationalists rallied outside the Montenegrin embassy in Belgrade last week and tried to burn its flag, while Serbian president Aleksandar Vucic cancelled a mooted Christmas visit to Montenegro over fears of violence.

Montenegro – which has a large ethnic Serb minority – angered Russia by joining Nato in 2017, a year after accusing Moscow of involvement in a failed coup plot.

“There is not just an outward resemblance – in both countries the same plan is actually being implemented, a plan devised far beyond their borders.”