Almost 1,000 refugees and migrants returned to Libya as war continues 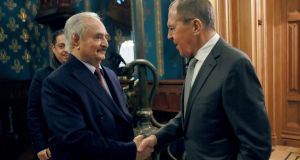 Almost 1,000 refugees and migrants have been returned to war-torn Libya from the Mediterranean Sea in the first two weeks of 2020, according to the UN.

Under a nearly three-year-old deal, the EU is spending close to €100 million on the Libyan coastguard to prevent refugees and migrants making the crossing to Europe. Those returned are usually put in indefinite detention, where human rights abuses are common and an uncounted number have died from neglect or violence.

Roughly 400 others were rescued over four days last week by NGO ships and Malta’s armed forces, while 97 made it to Italy themselves, according to Alarm Phone, a charity operating a phone hotline for boats in distress on the Mediterranean Sea.

“With the escalation of conflicts in Libya, we can expect that even more people will try to flee in order to seek asylum in Europe over the coming weeks,” Alarm Phone said in a statement. “Will they all have to choose between the unbearable violence of war and torture camps or the invisible violence of the sea and European deterrence efforts there? How many lives will it take before Europe creates safe passages for people seeking safety and freedom?”

Staff from the International Organisation for Migration said they were told to leave the area after 60 migrants returned to Tripoli on a commercial vessel refused to disembark. The IOM later said in a tweet that all of the migrants had been disemarked and taken to a detention centre. Libyan authorities did not respond to a request for comment.

A friend of Mengesha’s told The Irish Times the murdered man had escaped indefinite national service in Eritrea. He had tried to get to Italy twice but was returned to detention. “He had depression from [more than] 10 years [as a] soldier without hope,” his friend said.

War has raged in the Libyan capital, Tripoli, since April 2019, when eastern general Khalifa Haftar announced he was advancing on the city with the aim of wresting control from the UN-backed Government of National Accord (GNA).

On Saturday, German chancellor Angela Merkel announced Germany was planning to hold a summit on January 19th to discuss the Libyan war, with the United Nations leading talks.