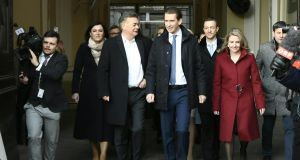 Austria’s conservative chancellor Sebastian Kurz (right) and the leader of the Austrian Green party Werner Kogler arrive for the swearing-in ceremony of their new government. Photograph: Robert Jaeger/APA/AFP via Getty

Austrian voters watched with interest on Tuesday as a new government took office comprising the conservative People’s Party (ÖVP) and the Greens.

Tuesday’s swearing in at Vienna’s Hofburg palace marked the comeback of ÖVP leader Sebastian Kurz as chancellor. The 33-year-old wins back for Austria the title of youngest head of government from Finnish prime minister Sanna Marin (34), who took office last month.

The new Viennese alliance marks two firsts: the first time the Greens have joined an Austrian federal government; and the first Austrian cabinet, of 15 members, to have a majority of women.

Seven months ago a previous Kurz coalition with the far-right populist Freedom Party (FPÖ) collapsed after its leader was shown in a secret video apparently promising state contracts for political donations.

A subsequent row saw the FPÖ leave government and vote against Kurz in a confidence vote. Since June, Austria has been governed by a non-partisan expert government under chancellor Brigitte Bierlein, a former constitutional court justice.

September’s snap election saw a surge in support for the Kurz-led ÖVP and the Greens, the latter gaining from the so-called “Greta effect”, after the teenage Swedish climate activist. A slump in support for the populist FPÖ and the centre-left Social Democrats (SPÖ) left Kurz with few credible options for power other than to approach his party’s traditional ideological enemies – the Greens – for talks.

“We are taking on a lot in the governmental programme, from tax relief for working people, through steps toward better environmental protection, to a consistent line in the areas of security and migration,” said Kurz during a short ceremony on Monday, vowing to keep migration and security concerns at the heart of his time in office.

The formation of the new government is a triumph for Kurz, who has secured for his party almost all senior ministries including finance, defence, foreign and interior. Snagging the latter is a source of delight to the conservatives given the post was previously held by a controversial FPÖ ideologue.

Eight of the 15 cabinet members are women, including Austria’s first female defence minister, Klaudia Tanner, and justice minister Alma Zadic, a Green whose family fled the conflict in Bosnia when she was 10. The Greens will head the justice, social affairs and sports and culture departments.

Under Green influence, the new Austrian government will work to make the country carbon neutral by 2040 – a decade ahead of the EU’s own 2050 goal.

Overseeing this work will be Werner Kogler, Green leader and new deputy chancellor. He heads a new super ministry with responsibility for environment, energy and transport. New Green measures include a tax of €12 on every short- and medium-haul flight. The government is to boost spending on public transport and has promised a yearly pass, costing €3 a day, to cover the entire national transport network.

Appealing to ÖVP voters, the coalition promises income and corporate tax cuts, an extension of a headscarf ban for school girls from 10 to 14 years and a form of preventive detention for those judged a danger to society.

Learning from the collapse of the last government, the new coalition has promised measures to strengthen the Court of Auditors, including greater powers to oversee party finances.

President Alexander Van der Bellen, swearing in his third government in little over two years, warned the new government to be mindful of the public’s great expectations and work to rebuild trust in government strained by last year’s scandal.

“Our democracy... had energy for cleansing and renewal,” he said, warning the new government ministers that power “is a means to an end, not an end in itself”.

Political commentator Prof Thomas Hofer said the president may yet play a decisive role as mediator between two coalition parties who “from a content perspective are miles apart from each other”.

“There are at least 10 to 15 pre-determined breaking points in this programme for government,” he said, estimating the policy overlap of both parties at just 20 per cent. But he said election fatigue and a weak opposition may give the government – and voters – a chance to adjust to Austria’s new political reality.