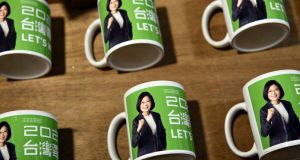 Beijing has said that anyone seeking to keep Taiwan separate from China would “leave a stink for 10,000 years” in its strongest remarks since the re-election of Tsai Ing-Wen, who opposes unification with China.

On Monday, while on a tour in Africa, foreign minister Wang Yi said: “The unification of the two sides of the strait is a historical inevitability,” Xinhua news agency reported.

He described those going against this trend as bound to “stink for 10,000 years”, an idiom to say one will “go down in infamy”.

Ms Tsai’s landslide electoral victory on Saturday has been embarrassing for China, where state media spent most of the past year isolating Taiwan on the diplomatic stage, deriding Ms Tsai and highlighting the popularity of her opponent, Han Kuo-yu, of the pro-China Kuomintang party.

Her win, after a campaign that leaned heavily on Hong Kong as a cautionary tale for Taiwan, is widely seen as a repudiation of Beijing’s attempts to draw Taiwan into its fold through military intimidation, economic incentives, cultural exchanges and other means. Beijing views Taiwan, a functionally independent country, as part of its territory.

Beijing has sought to downplay the election results, which also saw the ruling Democratic Progressive party maintain its majority in the legislature, giving Ms Tsai’s administration a stronger mandate over the next four years.

“Yet no matter how much uncertainty there is across the straits, the fact that the Chinese mainland is getting increasingly stronger and the Taiwan island is getting weaker is an inevitable reality,” an editorial late on Saturday said.

This week authorities have tried to highlight the struggles Taiwanese people will suffer under the DPP. On Tuesday the international version of the People’s Daily, the mouthpiece of the party, criticised the DPP for focusing on politics rather than Taiwan’s struggling economy, a common argument made by Beijing and pro-China groups in Taiwan that closer ties would help wage and job growth.

“The people of Taiwan must tighten their belts and continue to live a hard life,” the paper said. State media have also accused “external dark forces”, such as the US, an ally of Taiwan’s, of having a hand in the election.

Experts say China is likely to double down on its strategy of punishing Taiwan. During Ms Tsai’s first term, Beijing cut off a dialogue mechanism, independent travel to Taiwan, and persuaded several of Taiwan’s few remaining allies to switch diplomatic recognition.

In her victory speech on Saturday, Ms Tsai said she was committed to maintaining peaceful cross-strait relations but said it was a responsibility to be borne by “both sides”.

“China must abandon threats of force against Taiwan,” she said. “ . . . Democratic Taiwan and our democratically elected government will not concede to threats and intimidation.” – Guardian