Polling day: ‘Tactical voting could be the story of this election’

‘The British like a slightly bumbling upper-class person. That’s part of the psyche’ 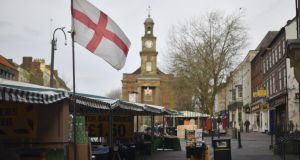 “If enough people vote tactically in just nine or 10 constituencies, it could deny Boris his majority,” says Lockie Shoebridge, secretary of the Young Conservatives at Keele University.

The emergence of tactical voting as a significant force in the final days of campaigning in the UK election has made the Conservatives in this key region visibly nervous. For Boris Johnson to get his majority, he’ll need to break through the so-called Labour “red wall” – leave-voting constituencies that have typically elected Labour MPs.

With polls suggesting that up to one in three voters nationally could vote specifically to block a Conservative majority, there’s no room for complacency on either side. Tactical voting “is purely around ‘stop Boris’,” says Dr Gemma Loomes, a politics lecturer at Keele University.

Websites such as votesmart2019.com, launched just a week ago, offer constituency-by-constituency recommendations. “Voting for your preferred party could help the Conservatives win,” the website warns. “If you want the safety net of a more balanced parliament, the best way to make a difference is by voting for the opposition party most likely to win.”

“It’s people who really don’t mind if they vote Liberal Democrat, Labour, SNP in Scotland or Plaid in Wales, just as long as they stop Boris from getting a big majority, or a majority at all. Lots of students are thinking, where can I most effectively use my vote? Can I use it in my home constituency, or in my university constituency? Tactical voting could be very, very significant,” Loomes believes.

Here, in the ultra-marginal borough of Newcastle-under-Lyme, voting tactically means voting Labour. “I sympathise with tactical voters, but here, there were 30 votes in the difference” in 2017, says George Winter, a member of Keele University Labour Students.

Drained by the campaign, he’s buoyed by his confidence in Labour’s chances locally. “I can’t even really put into words how easy it’s been to change the ‘don’t knows’ into Labour votes. You just have to point out those 30 votes. When we were first going out canvassing, I was really concerned. But the more we were going out, we’re finding more people who are Labour supporters.”

Tuesday is farmers’ market day outside the students’ union, and there is a long line at the hot chocolate stand run by Adrian Rose. “As things stand up to the moment, even though I know he’s a character, I’m going to vote for Boris,” Rose says, between servings of the orange hot chocolate that’s a big hit with students.

If the election is proving divisive on the streets and even within families, the banter here is all very good-natured. Becks Hunt, who’s working the hot chocolate stand with Rose, is probably going to vote Labour, on the basis of the issues that matter most to her – LGBT rights and student debt.

“Boris is not a very good representation of British people and what our morals are, for the most part,” says another Labour-voting student, Lisa Mahachi. She is mystified by the “I think he’s an idiot but I’m going to vote for him” rationale she hears. “I mean, you’re basically saying, yes, I’m an idiot too,” she says.

“The British like a slightly bumbling upper-class person. That’s part of the English psyche. They like the idea that he is a bit shambolic, even a bit dangerous, in the sense that he doesn’t really control himself very well. They think, isn’t he lovable? He’s like a shaggy dog,” suggests Dr Philip Catney, a senior lecturer in the politics department. “I’d prefer that politics wasn’t reduced down to who do we think is endearing. We should be talking about his policies.”

He is predicting a Conservative majority of between 40 and 45 seats. Even before voting begins, Labour, he says, is already making plans to start examining “what went wrong” in the 2019 election.

“An opposition party should be at least 10 points ahead of the governing party going into an election. The fact that Labour was so far behind to begin with and has consistently been so far behind, should have been a great worry. Corbyn should have gone after 2017. He’s a very polarising figure,” Catney says.

Loomes is slightly more optimistic on Labour’s behalf. “We know from all the polling that young people are far more likely to vote Labour than Conservative,” she says, adding that the numbers of young voters who have registered over recent weeks may “slightly tilt” things in favour of Labour. She thinks the Conservative majority will be “in the high teens” and that “tactical voting could be the story of this election”.

Whatever happens, here in Newcastle-under-Lyme voters on both sides are at least able to agree on one thing. It is time for the country to start talking about something other than Brexit. “Once this election is over, we can start focusing on climate change, the NHS, education and all of that stuff that really matters,” says Shoebridge.

“Politics has become a lot of nastiness and sniping, and that’s what people are sick of. That’s why people want this election to just happen and be done with.”