The Irish Times view on the British election: Voters face an unenviable choice 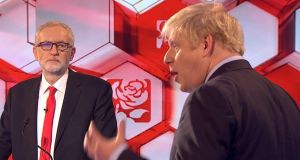 For both Jeremy Corbyn and Boris Johnson, the greatest failures have been reserved for the biggest issue: Brexit. Photograph: BBC/PA Wire

After a dismal election campaign, British voters today face an unenviable choice. The two leading parties, Labour and the Conservatives, are led by deeply flawed men whose failings are compounding the grave, era-defining crisis Britain faces.

Meanwhile, the distorting effect of the first-past-the-post system means that smaller parties will be squeezed and the heterogeneity of the electorate will be obscured by a system that privileges the status quo.

The stakes could hardly be higher. The UK is close to executing its biggest political-economic policy shift in half a century – a fundamental rupture that will alter its standing in Europe and its posture towards the rest of the world. That rupture was the product of deep tensions that imperil the very viability of the multi-national state.

The best political leader would struggle in the face of these challenges. But Britain has Boris Johnson, for whom mendacity, opportunism and lack of decency are defining characteristics.

The man who began the campaign declaring he would bring his country together concluded it railing against immigrants who “treat the UK as though it’s part of their own country” – open expression of the undercurrent of intolerant nativism that ran through his party’s campaign.

Standing against Johnson, and against a government that presided over a decade of austerity and turmoil, the Labour Party should be on course for a landslide. That their best hope is rather more modest – a hung parliament – is in large part due to their own leader, Jeremy Corbyn. He has also had to contend with a Tory-supporting press that has vilified him at every turn. Yet Corbyn’s shameful handling of Labour’s anti-Semitism crisis and his intolerance of dissent have made a difficult situation much worse.

For both Johnson and Corbyn, the greatest failures have been reserved for the biggest issue. Johnson’s vacuous pledge to “get Brexit done” ignores the fact that, even if the UK leaves the EU on January 31st, it then enters a long negotiation on the future relationship – a process that Johnson alone seems to believe could be concluded next year.

His claim that his withdrawal deal would not require checks on goods moving between Northern Ireland and Britain is also squarely at odds with how the EU27 understand the deal. Corbyn has tried to make a virtue of his failure to lead on Brexit, but by trying to please both Leavers and Remainers, he has ended up disappointing both while making it impossible for him to set out a coherent vision for the country.

It’s a measure of Britain’s problem that its best hope of securing the outcome that is most clearly in its national interest – a second referendum – requires the failure of the two big parties and the emergence of a parliamentary configuration that amplifies sensible voices that have for so long struggled to be heard.