Brexit: Theresa May says an extension will only delay decisions

Tusk confirms he has discussed an extension with May: says it is a ‘rational solution’

Donald Tusk, the president of the European Council, said he had discussed an extension with Mrs May and said he it would be a "rational solution". Video: Council of the European Union 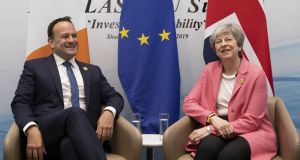 British prime minister Theresa May says an extension to the article 50 process governing when the UK leaves the EU would only delay decisions on Brexit and says she believes the UK can leave with a deal by March 29th.

Speaking from Sharm el Sheikh, Egypt, where she is attending an EU-Arab League summit, Mrs May did not rule out a delay but said it would not “deliver a decision in parliament.”

“[A delay] doesn’t deliver a deal. It just delays the point at which we come to that decision. An extension of article 50 in that sense isn’t addressing the issue.”

Donald Tusk, the president of the European Council, said he had discussed an extension with Mrs May and said he wanted to “end the speculation”.

“For me it is clear there is no majority in the House of Commons to approve a deal,” Mr Tusk said. “The less time there is until the 29th of March, the greater the likelihood of an extension.”

Mr Tusk added that Mrs May believes she can avoid this scenario.

Earlier Taoiseach Leo Varadkar, who met Mrs May on the margins of the summit, said he believed Brexit deal will be reached by the end of March or there will be an extension of the period of negotiation between the EU and Britain

“What is evident to me is that absolutely nobody wants the United Kingdom to crash out of the European Union without a deal,” he told reporters.

“That is a lose-lose-lose scenario for everyone and it gives me confidence, or at least a sense, that the UK will not crash out of the EU without a deal on the 29th of March. We will either have a deal or we will have an extension.”

Mr Varadkar, however, indicated he had no firm position on the terms of an extension, if one was requested by the UK.

“The European Union can’t really consider any requests for an extension until that comes in and it hasn’t as yet.

“A lot of people, a lot of colleagues, feel that if there is an extension, it should be an extension with plan rather than an extension just to continue negotiations which have already gone on for almost two years. But my own view is that nobody wants a no deal exit by the UK on 29th March.

Extending the article 50 negotiating period beyond the European Parliament elections at the end of May has been seen as a problem because it would mean Britain remaining an EU member for longer and electing MEPs.

Mr Varadkar said this is a “small complication relative to the impact on our economy and Northern Ireland if there is a no deal Brexit”.

After the meeting between Mr Varadkar and Mrs May, an Irish Government spokesperson said: “The Taoiseach and the British Prime Minister had a good discussion on Brexit and Northern Ireland. No proposals were tabled. The Prime Minister referred to her intention to make a statement to the British Parliament tomorrow. The two sides agreed to stay in contact. The UK is continuing its discussions with the European Commission.”

At the meeting, Mr Varadkar told Mrs May that an extension of the negotiating period would be preferable to a no deal scenario.

Provisions have already been made for the European Parliament elections to be held before or after Brexit takes effect.

If Brexit is delayed, the fourth and fifth finishers in the respective constituencies will be placed in reserve until Britain leaves the EU and its MEPs withdraw.

“The way it works is that if an extension is being mooted the UK has to request it and the EU considers it. From my point of view and from Ireland’s point of view, I would certainly rather see an extension than the UK leaving without a deal. A long extension does create a complication of course, in terms of the European elections and so on, but that’s a small complication relative to the impact on our economy and Northern Ireland if there is a no-deal Brexit.”

British defence minister Tobias Ellwood on Monday hinted Mrs May could be poised to propose an extension to article 50 and said if she does not, he is “tempted” to vote for a delay to Brexit.

“I don’t support the idea that we go ahead towards no deal,” he told BBC Radio 4’s Today programme.

Over the weekend three British cabinet ministers demanded the prime minister stop using the threat of a no-deal Brexit as a negotiating tactic.

Mrs May has admitted she will not get a new Brexit proposal in time for MPs to hold a “meaningful vote” this week, amid warnings time is running out for an agreement before Britain leaves the European Union.

Mrs May on Sunday delayed the vote until March 12th, 17 days before Britain is to leave the EU, as her ministers threatened to take control of the exit timetable. Mr Varadkar said this delay does not change anything.

As a way to break the impasse remains unclear, reports last night suggested support in EU circles for a long extension of the article 50 period, possibly delaying the UK’s departure until 2021.

However, senior Brussels sources dismissed these reports as inaccurate. The Guardian reported this lengthy extension was favoured over a short extension to allow for plans on the future relationship to be developed and make redundant the backstop, the insurance policy to prevent a hard border on the island of Ireland.