Over 120 firefighters were tackling a huge fire that ravaged the Glasgow school of Art. Video: Reuters 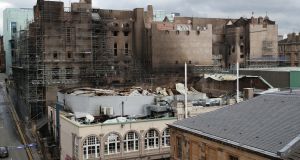 Exterior view of the Glasgow School of Art in the historic Mackintosh Building, and of the adjacent O2 ABC Glasgow, as firefighters continue to work following a major fire on Friday night. Photograph: Andrew Milligan/PA Wire

Calls for a public inquiry into the fire that gutted Glasgow’s world-renowned School of Art have been rejected as premature.

Both UK Scottish secretary David Mundell and Scotland’s culture secretary Fiona Hyslop said fire service investigations into the cause of the blaze should be allowed to progress before any other decision is taken.

About 50 firefighters were still working on Sunday at the scene of the blaze, which broke out on Friday night, engulfing the Charles Rennie Mackintosh masterpiece and spreading to nearby buildings, including the popular music venue the O2 ABC.

A few pockets of fire remain at the site, with crews using thermal imaging cameras to identify any hot spots.

The blaze is the second in four years to hit the Mackintosh Building, which was undergoing a multimillion-pound restoration project to return it to its former glory.

Ms Hyslop told the BBC’s Sunday Politics Scotland programme that no one had yet been able to enter the building.

She said once it had been declared safe, building control and Historic Environment Scotland (HES) officials would assess the situation and the exterior of the art school.

On calls for a public inquiry, she said: “I can understand people want lots of their questions answered but clearly we’ve got to have the process in place first, we have to have the fire investigation first, and I think we should give people the time to carry out those very responsible duties to best effect – and that will give us clarity of what is possible going forward.

“The sensible thing to do is to find out what the source of the fire was and how that spread in the initial stages.

“All these questions will be addressed by the fire investigation. We need them to do their job initially and that is very, very important.”

She confirmed HES had taken a digital record of the building and its contents after the previous 2014 fire, but added: “The severity of this is very severe so I’m not giving any commitments at this stage.”

Speaking on the same programme, Mr Mundell said: “I don’t at this stage think there’s a case for a public inquiry unless someone can bring forward some exceptional reason.

“I think the initial inquiries should take place as would normally follow a fire into what was the cause and what were the related circumstances.”

Earlier, Scottish Fire and Rescue Service (SFRS) group manager Martin Hill said: “This has clearly been a protracted incident and today we are still very much in a firefighting phase.

“Our firefighters have been working effectively throughout the night and we are continuing to dampen down any remaining pockets of fire.

“We are also using thermal imaging cameras to identify any hidden hotspots and will continue, working alongside partners, to assess our priorities and our tactical firefighting operation over the course of the day.

“We will remain on the scene for as long as it takes – we are absolutely committed to preventing any further damage to surrounding properties and ensuring the area is made safe.

“I would like to express a sincere thank you to our crews on the ground and our firefighters in operations control for continuing to effectively co-ordinate our resources as well as our partners, along with the wider community.”

SFRS has said it is too early to determine the cause of the fire.

The Holyrood and Westminster governments have said they stand ready to provide support, including financially, to the art school as it assesses what the future may hold.

1 DUP pleads with UK to reduce salary threshold for migrant workers coming to North
2 A Russian cruiser with ‘cannibal rats’: What other ‘ghost ships’ could be out there?
3 ‘If all the immigrants go back, who will work in the meat factories and do the crap jobs?’
4 Jewish council dismayed at Sinn Féin TD’s ‘unacceptable’ tweets
5 Gardaí investigating four-lane motorway sulky race
Real news has value SUBSCRIBE