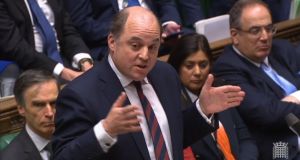 Britain has taken “urgent measures” to protect its nationals and interests in the Middle East, and put ships and helicopters on standby in the region, defence secretary Ben Wallace has told MPs.

“From the information and intelligence I have seen it is clear that there is a case for self-defence to be made, about an individual who had come to Iraq to co-ordinate murder and attacks on US citizens,” he said.

Iran has threatened to retaliate for the killing, and Iraq’s parliament voted on Sunday for all foreign coalition forces [anti-Isis], including the British, to leave the country.

Mr Wallace said the British government was discussing the implications of the vote with the Iraqi authorities, but he confirmed that non-essential personnel had been moved out of Baghdad.

“Coalition forces in Iraq, including British forces, have suspended all training activities, and as part of prudent planning a small team has been sent to the region to provide additional situational awareness and contingency planning assistance,” he said.

“In the coming days we will be doing all we can to encourage Iran to take a different path. No one should be under any illusion: long before the death of Gen Suleimani, Iran had stepped up its destabilising activities in the region.

“Whether it was targeting dissidents in Europe or hijacking civilian ships, this aggressive behaviour was never going to go unchallenged.”

Labour leader Jeremy Corbyn accused the government of giving cover to the US for what appeared to be an illegal act because Boris Johnson was eager to curry favour with Donald Trump.

“This is not a question of Suleimani’s actions or record in the region. Whatever the record of any state official, the principle and the law is that we do not go around assassinating foreign leaders. Without the clear demonstration of an immediate threat, it is illegal.”

Foreign secretary Dominic Raab was in Brussels on Tuesday for meetings with French, German and Italian foreign ministers about the escalating military conflict in Libya. In the sidelines they discussed the aftermath of the Suleimani killing, and particularly their concern for the fate of the Iran nuclear deal signed in 2015.

Their discussion is believed to have focused on preparations for a full emergency meeting of EU foreign ministers on the issue on Friday.

The European Commission was unwilling to be drawn on Iranian declarations that it is lifting ceilings on nuclear enrichment or whether the deal dispute mechanism would be triggered.