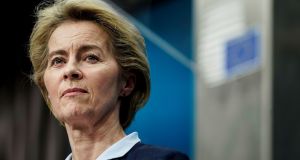 The Withdrawal Agreement Bill returned to the House of Commons on Tuesday and will pass all its stages there by Thursday.

Deputy speaker Roger Gale has set aside time on Wednesday for MPs to debate amendments backed by the DUP, the SDLP and Alliance calling for legally binding guarantees on “unfettered access” for Northern Irish businesses to the whole United Kingdom market after Brexit.

The Conservatives’ 80-seat majority means that no amendments will succeed unless the government adopts them and Downing Street has given no indication that it intends to do so.

During his meeting with Ms von der Leyen, Mr Johnson is expected to stress that in the forthcoming negotiations about its future relationship with the EU, Britain is seeking an ambitious free trade agreement that is not based on regulatory alignment.

“The prime minister is expected to stress the importance of agreeing a confident and positive future relationship by the end of December 2020. He is expected to tell President Von der Leyen that, having waited for over three years to get Brexit done, both British and EU citizens rightly expect negotiations on an ambitious free trade agreement to conclude on time. There will be no extension to the Implementation Period, which will end in December 2020 as set out in the Political Declaration,” Downing Street said in a statement.

Mr Starmer, who is currently the frontrunner, said he believed Labour could take Mr Johnson’s government on despite what he described as a “devastating” defeat at last month’s general election.

Ms Nandy, who wants Labour to focus on reconnecting with former supporters in Leave-voting seats like hers in Wigan, said the leadership election was the most important in the party’s history.

“Now is not the time to steady the ship. If we do not change course we will die and we will deserve to,” she said.

Ms Philips warned that the party risked being irrelevant over the next four years if it chose an apparently safe option for leader. “I don’t want to be the leader of the opposition – I want to be prime minister,” she said.

A number of candidates criticised Mr Corbyn’s handling of anti-Semitism in the party and Ms Thornberry said she and Sir Keir had spoken out about it in shadow cabinet. She did not mention the other candidate from the shadow cabinet, Ms Long Bailey, who is close to the current leadership and told ITV News on Tuesday that she would give Mr Corbyn 10 out of 10 as leader.

“I’d give him 10 out of 10, because I respect him and I supported him all the way through. What we can’t ignore was that Jeremy was savaged from day one by the press,” she said.