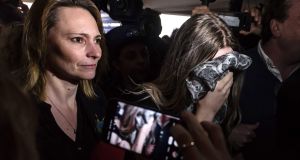 A British teenager convicted of falsely accusing a group of Israelis of gang-rape at the Famagusta district court in Cyprus on Tuesday. Photograph: Iakovos Hatzistavrou/AFP via Getty Images)

The Cypriot authorities will continue to face pressure to rectify an injustice due to the four-month suspended sentence delivered on Tuesday in the case of the 19-year-old British woman charged with lying about gang rape by Israeli youths last July.

Convicted in December of committing a “public nuisance” for making the accusation and then retracting it, she could have been jailed for a year and fined $2,000. While remaining guilty as charged, she insists on her innocence and her lawyers intend to launch an appeal in the Cypriot supreme court. If this is not expedited, she intends to appeal to the European Court of Human Rights.

The bungled case has created a public rift between Cyprus and Britain and generated protests by local legal and forensic experts, as well as civil rights and women’s groups, including one from Israel.

The alleged gang rape took place in a hotel room where the teenager had consensual sex with an Israeli she met during the summer holiday season in the coastal town of Ayia Napa. She alleged that his friends turned up and raped her, after which she went to the police to lay charges.

The Israelis were detained, but 10 days later the traumatised woman was subjected to a seven-hour overnight interrogation by male police officers, after which she signed a retraction.

The proceedings were not taped and she was not accompanied by a lawyer, as required under a European Union directive adopted by Cyprus but not implemented.

The document was seen as suspect by her defence team as it did not appear to be written by a native English speaker. The Israelis were set free and allowed to fly home while she was imprisoned for a month and then confined to the island until Tuesday.

Cypriot media argued the government had put pressure on the police to release the Israelis by compelling the woman to retract. While the government has denied interference, Israel and Cyprus have joined forces to counter Turkish intervention in the Eastern Mediterranean development of offshore natural gas resources.

The woman’s mother has declared Cyprus “unsafe” and urged tourists to shun the island due to Ayia Napa’s dangers and the mishandling of the case.

Its Wild West reputation draws plane loads of largely young tourists looking for free-wheeling adventures. Although Ayia Napa – which receives 40 per cent of summer visitors and caters to UK travellers – has tried to curb inappropriate behaviour, partying lads and lasses continue to circulate in bars and clubs.

The Cypriot police have come under severe criticism not only for botching this case but also for ignoring repeated reports of missing foreign women serving as household help. The fate of five women and two girls was revealed last year when the body of the one victim was discovered in a flooded mineshaft by a hiking tourist.

The corpses of the others – from the Philippines, Nepal and Romania – were found in the same area, and army captain Nicos Metaxas was charged with raping and killing them between 2016 and 2018, becoming the island’s first serial murderer.

The justice minister and police chief resigned and legislators have pressed for serious investigations of other cases of missing and murdered foreign women.