Brexit: MPs vote to delay the UK’s exit from EU

Most Conservatives, including eight ministers, voted against May’s motion in a free vote

The UK could face a long delay to Brexit if MPs cannot agree a way forward in coming days says prime minister Theresa May, after MPs voted to reject leaving the EU without a deal in any circumstance. Video: Reuters 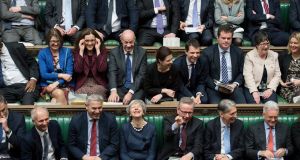 British prime minister Theresa May is seen in the House of Commons, London, on Thursday. Photograph: UK parliament/Jessica Taylor/PA Wire

MPs have voted to delay Britain’s departure from the EU by at least three months as talks continue between Theresa May’s government and the DUP in an effort to save the withdrawal agreement. The government’s motion calling for an extension of the article 50 negotiating deadline passed by 412 votes to 202.

But most Conservatives voted against the motion in a free vote that saw eight cabinet ministers including Brexit secretary Stephen Barclay oppose it. The prime minister hopes to put the Brexit deal to a third vote in the House of Commons before next Wednesday and if it passes, she will seek a short extension until June 30th to pass implementation legislation.

If the deal is rejected, she will seek a longer extension and offer MPs a chance to vote on alternative options on Monday, March 25th. European Council president Donald Tusk said on Thursday that he would ask EU leaders to be open to a long extension “if the UK finds it necessary to rethink its Brexit strategy and build consensus around it”.

The government is seeking to persuade the DUP to support the Brexit deal if attorney general Geoffrey Cox can change his legal advice about the risk of the Northern Ireland backstop enduring indefinitely. The two sides are also understood to be talking about guarantees from London that Northern Ireland will not have to diverge from British regulations and about extra funding for Northern Ireland.

Speaking in Washington, Taoiseach Leo Varadkar welcomed the House of Commons vote, saying it reduces the likelihood of a cliff edge, no-deal Brexit on March 29th.

“But we now need to hear from London about what purpose an extension would serve and how long it would last,” he said.

He said there seems to be “two emerging options”. These are “ratification of the withdrawal agreement followed by a short extension into the summer”, or “a much longer extension that would give the UK time and space to decide what they want to do”. This would include “considering options that had been taken off the table like participation in the customs union and single market”.

“I think we need to be open to any request they make, listen attentively and be generous in our response,” Mr Varadkar said.

“This matter will be now discussed further at next week’s European Council meeting and hopefully we will have more clarity from London in the meantime about their intentions. Unanimity by the 27 will be required for any extension.”

Minister for Foreign Affairs Simon Coveney told RTÉ earlier on Thursday: “If you have a long extension of, say, 21 months, to the end of 2020 — whatever the period would be — then Britain has a legal entitlement to have representation in the European Parliament” and so must take part in forthcoming EU elections.

During Thursday’s ballots, British MPs voted against an amendment for a second Brexit referendum, after voting on such a proposal for the first time.

MPs also rejected a cross-party amendment submitted by Labour’s Hilary Benn and supported by his fellow Labour MP Yvette Cooper plus seven others, including the Conservatives Oliver Letwin and Dominic Grieve.

This amendment was designed “to enable the House of Commons to find a way forward on [Brexit] that can command majority support” by effectively allowing MPs to wrest control of parliamentary time from British prime minister Theresa May’s government to force a series of indicative votes to establish MPs’ preferred option for Brexit.

A further amendment to this “indicative votes” plan, tabled by Labour’s Lucy Powell, was rejected. It would have limited to June 30th any extension of Brexit talks to discuss parliament’s preferred option.

A Labour frontbench amendment was also defeated in the Commons. The amendment instructed Mrs May to seek an unspecified extension to article 50 to avoid exiting the EU on March 29th without a deal and “to provide parliamentary time for this House to find a majority for a different approach”.

That would have implied a long extension, as few believe that a radically different Brexit deal to the one already negotiated by Mrs May can be agreed quickly with the EU.

A fourth and final amendment from Chris Bryant, a Labour backbencher, was withdrawn. Mr Bryant wanted MPs to vote on whether to block a third “meaningful vote” on Mrs May’s existing Brexit deal.

Ahead of the ballots, it emerged Mrs May was set to put her twice-rejected Brexit deal to a vote in the House of Commons again, piling pressure on rebel politicians to back her battered agreement.

The latest developments come amid reports the DUP leader, Arlene Foster, has signalled her party is ready to do a deal to end the Brexit impasse. Tory eurosceptics told the Guardian that they and the DUP could be persuaded to back Mrs May’s Brexit deal if Geoffrey Cox, the attorney general, gave clearer legal advice about how the UK could withdraw from an international treaty.

Mr Bercow unexpectedly selected the second referendum amendment from Sarah Wollaston. Ms Wollaston, who recently defected from the Conservatives to the Independent Group, had won support from the Liberal Democrats for her amendment.

It said that the UK’s exit from the European Union should be delayed for the purpose of “legislating for and conducting a public vote” in which staying in the EU is an option on the ballot paper.

Many members of Labour abstained from the vote on the second referendum, after all of the party’s MPs were ordered to do so.

There were complaints in the Commons after Mr Bercow refused to select another amendment, opposing a second referendum, which had attracted the support of 111 MPs, mostly hardline Brexiteer Conservatives, with the support of the DUP and a handful of Labour MPs.

It called on MPs to declare that “the result of the 2016 EU referendum should be respected and that a second EU referendum would be divisive and expensive and therefore should not take place”.

Signatories of the amendment in the name of the Conservative MP Lee Rowley included Boris Johnson and Bill Cash, plus the DUP’s Nigel Dodds and Labour MPs including Gareth Snell, Denis Skinner, Kate Hoey and John Mann.

Meanwhile, the Daily Mail reported on Thursday night that Liberal Democrats leader Vince Cable will step down as the leader of his party after local elections in May.

Cable, who previously intended to step down after Brexit was resolved, said in an interview with the newspaper that “it now looks as if it [Brexit] will be a protracted process, and may never happen”. He will continue as a member of the British parliament, the Daily Mail added. – Additional reporting: Reuters/Guardian