EU on no-deal Brexit vote: ‘Like Titanic voting for the iceberg to move’

MEPs were in the European Parliament in Strasbourg to debate the UK’s withdrawal from the EU after the outcome of the vote on Brexit in the UK House of Commons. Video: European Parliment 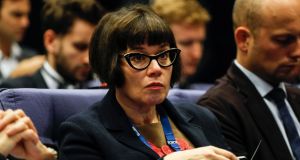 Brussels has said a vote by UK MPs to block a no-deal Brexit in any circumstances is a meaningless move, with one senior EU negotiator describing it as “the Titanic voting for the iceberg to get out of the way”.

A European commission spokesman offered a withering assessment of the decision by MPs to ignore Theresa May’s assertion that no deal was the default position unless there was a deal in place by the time of the UK’s departure.

“We take note of the votes in the House of Commons this evening,” the spokesman said. “There are only two ways to leave the EU: with or without a deal. The EU is prepared for both. To take no deal off the table, it is not enough to vote against no deal – you have to agree to a deal. We have agreed a deal with the prime minister, and the EU is ready to sign it.”

British MPs voted by 312 to 308 to support a backbench amendment ruling out a no-deal Brexit and striking out a phrase in a government-backed motion noting that no deal remained the default position in UK and EU law if an agreement was not ratified.

On Thursday, MPs will vote on whether to request an extension of the article 50 negotiating period beyond March 29th until June 30th.

MPs will have also the opportunity to vote on up to four amendments to Mrs May’s proposed delay to Brexit on Thursday, speaker of the House of Commons John Bercow said.

Mr Bercow said he had selected an amendment put forward by a group of independent lawmakers calling for a second referendum on Brexit, as well as one proposed by the Labour Party that calls for Mrs May to use a Brexit delay to give parliament time “to find a majority for a different approach”.

The final two selected are a plan to take control of the parliamentary agenda with the aim of forcing a discussion of Brexit options, and one that takes issue with the prospect of the government bringing Mrs May’s deal back unchanged for a third “meaningful” vote.

Michel Barnier, the EU’s chief negotiator, speaking to the European parliament in Strasbourg earlier on Wednesday, questioned whether the EU should offer extra time for talks, leading officials to prepare for all options to be on the table at a leaders’ summit next week.

“Why would we extend these discussions?” Mr Barnier asked. “The discussion on article 50 is done and dusted. We have the withdrawal agreement. It is there.”

During a private meeting before his public comments, Mr Barnier advised senior MEPs that at present there was no consensus among the EU’s member states over an extension, let alone on the conditions that would be attached.

At the same time, the EU’s deputy Brexit negotiator, Sabine Weyand, told EU ambassadors that she feared the Commons was “divorced from reality”.

Quoting private remarks by the Dutch prime minister, Mark Rutte, Ms Weyand concurred with his description of the decision to vote for no deal as “like the Titanic voting for the iceberg to get out of the way”.

Ms Weyand said the second defeat for Mrs May’s deal on Tuesday night showed that “a short technical extension” of article 50 talks should be ruled out. A long extension would only be on offer in the event of a general election or second referendum.

But France and Germany are among several countries who want to see more flexibility.

It is understood the German chancellor, Angela Merkel, had let it be known during a summit in Sharm el-Sheikh last month that she would regard an extension until the end of June, by which time European parliament elections will have been held, but MEPs will not have sat, as relatively straightforward.

Dr Merkel had said an extension up until the European elections at the end of May was “very easy”, with a delay until the chamber convenes in July described as “easy”.

The ambassadors concluded at the meeting with Ms Weyand that an extension could be decided only by EU leaders, who will assess the question at the summit next Thursday, and will need to agree unanimously on any response to a request.

While various extension times have been mooted – from five weeks to 21 months – there is no consensus. Member states have refused to endorse a commission proposal that any extension should be a one-off.

The thorny problem of the need for British MEPs in the event of an extension beyond the European elections starting on Mrs May 22nd was raised during the meeting with ambassadors.

The EU’s lawyers said it was a “grey area” if the UK remained a member state between Mrs May and the end of June but that MEPs would almost certainly be needed to be elected after that.

The lawyers said a mooted treaty change to avoid such a scenario was not possible as the shortest such revision had taken two and a half years. “That’s dead,” said a diplomat involved.

With Downing Street likely to try to put Mrs May’s deal to the Commons again in the coming days, the German foreign minister, Heiko Mass, said: “Germany has prepared itself in the best possible way for the worst-case scenario. However, we still hope that we can avoid an unregulated Brexit – it is still in the hands of the House of Commons to do that.”– Guardian, Reuters