The UK could face a long delay to Brexit if MPs cannot agree a way forward in coming days says prime minister Theresa May, after MPs voted to reject leaving the EU without a deal in any circumstance. Video: Reuters 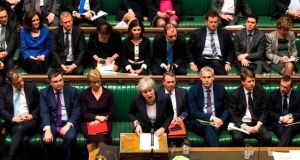 Theresa May has told MPs that they must pass her Brexit deal by next Wednesday or face a lengthy delay to Britain’s departure from the European Union.

The prime minister was speaking after the House of Commons voted to rule out a no-deal Brexit amid chaotic scenes, with the government telling MPs to vote against its own motion.

“If the House finds a way in the coming days to support a deal, it would allow the government to seek a short limited technical extension to article 50 to provide time to pass the necessary legislation and ratify the agreement we have reached with the EU,” the prime minister said.

“Such an extension would undoubtedly require the United Kingdom to hold European Parliament elections in May 2019.”

MPs will vote on Thursday on a motion saying that if a deal is approved by March 20th, a day before next week’s EU summit in Brussels, the government will seek a one-off extension to article 50 until June 30th.

The motion says that if no deal has been approved by then, the EU is likely to insist that an extension must be for much longer and that Britain would have to take part in May’s European Parliament elections.

The government appeared set for victory on Wednesday night on its motion ruling out a no-deal Brexit on March 29th after Conservative MP Caroline Spelman said she wanted to withdraw her amendment ruling out no-deal at any time.

But speaker John Bercow allowed Labour’s Yvette Cooper to move the amendment instead and it was passed by 312 votes to 308, a majority of four.

Unhappy at the prospect of ruling out no-deal beyond March 29th, the government imposed a three-line whip on Conservative MPs, telling them to vote against the main motion.

Junior minister Sarah Newton, who voted in favour of the motion, has resigned.

Mrs May told MPs that, despite Wednesday night’s vote, the legal default in British and EU law remains that Britain will leave the EU without a deal unless something else is agreed.

“The onus is now on every one of us in this House to find out what that is,” she said.

Earlier on Wednesday, Tánaiste and Minister for Foreign Affairs Simon Coveney told the Dáil that Ireland was open to an extension of article 50 for the UK but added that there had to be a purpose to such an extension – a view that is shared in Brussels.

Speaking in the United States after the votes in the House of Commons, Taoiseach Leo Varadkar said he expected Mrs May would come to next week’s EU summit in Brussels seeking an extension of article 50, but that “we’ll want to know what the purpose of that extension is and for how long”.

EU leaders including Michel Barnier pointed to an intensification of no-deal preparations, despite the expected outcome of Wednesday night’s vote to reject no-deal.

In the Seanad, Mr Coveney said that a no-deal outcome would be an “emergency management situation” and the Government would produce “detailed support plans” for sectors of the economy most seriously affected.