Government ministers step up warnings about a no-deal Brexit 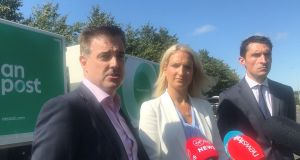 Garret Bridgeman, managing director of An Post mails and parcels with Minister for European Affairs Helen McEntee and Fergal O’Leary of the Competition and Consumer Protection Commission, talk to the media at the An Post Mail Centre in Portlaoise. Photograph: Cate McCurry /PA Wire

Government ministers stepped up their warnings about a no-deal Brexit on Monday as British prime minister Boris Johnson said he would take the talks with the EU to the very last minute before the October 31st deadline.

The Minister for Justice Charlie Flanagan said the UK was “heading straight” for a no-deal, while Europe minister Helen McEntee again ruled out the insertion of any kind of time-limit on the backstop – the legal guaratnee that the North will continue to follow EU rules and standards if no new deal is agreed in order to avoid a hard border.

“It seems clear that prime minister Boris Johnson and his Cabinet – comprising as they do a team of hard Brexiteers – are heading straight for the 31st of October come what may,” Mr Flanagan told WLR FM’s Deise Today programme on Monday.

“So there’s a lot of work to be done in the weeks ahead,” he said.

Ms McEntee said that a time-limit on the backstop, suggested at the weekend by former Europe minister Lucinda Creighton, would cease to function as an insurance policy that there would be no hard border.

“A backstop with a time-limit ceases to be a backstop. It exists as an insurance mechanism,” Ms McEntee said in Portlaoise where she was being briefed on An Post’s Brexit preparations.

“The backstop is a necessary legal guarantee for all of us to make sure those commitments are fulfilled. What’s been asked of us at the moment is to remove that legal guarantee and to replace it with nothing but a commitment to try and find some other solutions.

“Of course we have yet to hear from the UK as to what they might look like. We’ve heard certain proposals which have already been looked at by the EU and the UK together over the last two years - they’re not going to do the work that the backstop currently does. So for us, again, a time-limit on the backstop essentially removes the backstop because an insurance mechanism with a time limit on it ceases to be an insurance policy,” she said.

Ms McEntee said she did not accept that the Withdrawal Agreement was dead, despite the insistence of Boris Johnson that it must be removed from the agreement if a no-deal Brexit is to be avoided.

She pointed out that negotiations about a trade agreement that followed a no-deal would feature the same EU requirements for a guarantee on the Irish border.

In Biarritz, however, Mr Johnson said that the EU now understood that the backstop had to be removed if a no-deal was to be avoided.

He also said that he expected the talks to continue to the last minute, and that the EU would do a deal before the deadline elapsed.

“I do think that the EU does tend to come to an agreement right at the end,” he said.

“Clearly for us, the walking away as it were, would come on October 31 when we would take steps to come out on the terms for which we will have by then made absolutely colossal and extensive and fantastic preparations”.

The comments also come following a meeting between Mr Johnson and European Council president Donald Tusk at the G7 Summit in France at the weekend.