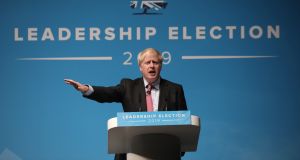 Boris Johnson has demanded the Northern Ireland backstop is removed and deleted before he could accept the withdrawal agreement as a basis for Britain’s departure from the European Union. In an interview with Andrew Neil on BBC News, Mr Johnson said arrangements to keep the Border open should be negotiated after Britain leaves on October 31st.

“They need to take the 175 pages of the Irish backstop and they need basically to remit it, to remove it, to delete it and to put the solution to all the issues of frictionless trade across the Irish border and indeed elsewhere and resolve them in the context of the FTA, the Free Trade Agreement,” he said.

Mr Johnson, who is the frontrunner to succeed Theresa May as Conservative leader and prime minister, accused Mrs May of seeking in the Brexit negotiations to keep Britain inside the customs union and the single market.

“What has changed now, what has changed now is that there is a different approach to the negotiations, a new optimism about. what we can do, a new spirit of determination to come properly out of the EU and to get a fantastic deal. And we do that by remitting the solutions to frictionless trade across the Irish border, the Northern Irish border and indeed all other borders to the work that needs to be done to do a free trade agreement. That is the way to do it. And that’s the way forward.”

The EU has repeatedly ruled out reopening the text of the withdrawal agreement or removing the backstop but both Mr Johnson and his rival Jeremy Hunt are campaigning on a promise to secure major changes to the deal. The backstop guarantees no hard border on the island of Ireland after Brexit. Mr Hunt said he would agree a proposal with the DUP, hardline Conservative eurosceptics and Scottish and Welsh Conservatives before seeking to negotiate it in Brussels.

In combative exchanges with Mr Neil, Mr Johnson sought to absolve himself from responsibility for the resignation this week of Britain’s ambassador to Washington Kim Darroch. In the end, Mr Johnson acknowledged that his failure to stand up for Sir Kim in a leadership debate on Tuesday was a factor in his decision to leave his post.

The Metropolitan Police said on Friday that they have launched a criminal investigation into the leak of confidential diplomatic cables in which Sir Kim criticised US president Donald Trump’s administration.

“Given the widely reported consequences of that leak, I am satisfied that there has been damage caused to UK international relations, and there would be clear public interest in bringing the person or people responsible to justice,” assistant commissioner Neil Basu said.

“I would say to the person or people who did this, the impact of what you have done is obvious. However, you are now also responsible for diverting busy detectives from undertaking their core mission. You can stop this now. Turn yourself in at the earliest opportunity, explain yourself and face the consequences.”

Mr Johnson’s evasiveness during Friday’s BBC interview and his slender grasp of detail will reinforce doubts among his critics about his suitability to be prime minister. But with just over a week to go before the votes of 160,000 Conservative party members are counted, his performance is unlikely to have a decisive impact on the outcome of the contest.