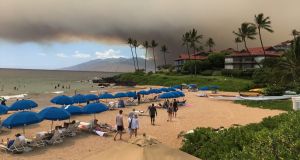 Thousands of residents and visitors on Hawaii’s Maui Island were ordered to evacuate two communities on Thursday as a spreading wildfire sent smoke billowing high into the sky, officials and local media said.

The 3,000 acre brush fire in Maui’s central valley remained uncontrolled on Thursday night, Maui mayor Mike Victorino told a news conference. He said firefighters would monitor it overnight but that it was too dangerous to battle the blaze in the dark.

“We can’t fight the fire tonight,” he said. “We’re not going to send any firefighters into harm’s way.”

The brush fire was reported about 10.30am local time and steady winds of up to 32kmh fanned the flames, officials said. It jumped a highway and spread across fallow fields and more brush. Two helicopters from the fire department also dropped water on the blaze to try to contain it.

While thousands were ordered to evacuate, it was unclear how many people fled the west Maui coastal communities of Maalaea and Kihei. But three shelters housed about 500 people late on Thursday, media reports said.

The Maui High School housed about 200 cats and dogs moved from a local animal shelter, the Honolulu Star-Advertiser reported.

Kahului Airport was briefly closed and flights were diverted because of the smoke, which also forced the closure of two major roads. But operations were back to normal around 7pm local time, media reported.

No injuries or damage to structures were reported, but some farm equipment burned, HawaiiNewsNow reported.

Neither Maui County officials nor a representative with the county’s Emergency Operations Center were available for comment early on Friday. – Reuters