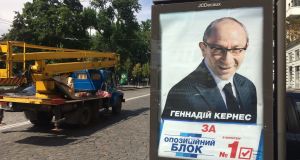 A campaign poster for Kharkiv mayor Hennadiy Kernes ahead of Ukraine’s July 21st parliamentary elections. He still dominates Ukraine’s second city despite political upheaval in the country and a 2014 gun attack that left him partially paralysed. Photograph: Daniel McLaughlin

The steely gaze of Georgy Zhukov is once more levelled at Kharkiv, eastern Ukraine, a month after protesters toppled a bust of the second World War Soviet marshal as a symbol of Kremlin and communist power.

“As I promised – we put it back in its place today,” the city’s mayor Hennadiy Kernes wrote on Facebook on Thursday, signing off with the hashtag “doveryai delam”, which is the name of his new political party and Russian for “trust in deeds”.

Five years after Ukraine ousted Moscow-backed leaders and aligned with the West, the issues that ignited the Maidan revolution still burn in the nation’s second city, which sits some 300km from its eastern war zone and just 35km from Russia.

To his critics, Kernes embodies exactly what the Maidan uprising sought to end – corruption, impunity and questionable loyalty towards Ukraine – yet he has come through national upheaval and a crippling assassination attempt to keep Kharkiv tightly in his grip.

Now Kernes (60) is running in July 21st elections that are set to sweep most of the old guard from parliament, but this wily survivor shows no sign of relinquishing power even as a new president vows to transform Ukrainian politics.

On the vast Freedom Square where Lenin used to stand, however, a survivor from 2014 continues to defy Kernes

Kharkiv’s towering statue of Vladimir Lenin proved less resistant to change, becoming one of hundreds of Soviet monuments demolished by Maidan supporters across the country in a campaign that inspired Zhukov’s recent assailants.

On the vast Freedom Square where Lenin used to stand, however, a survivor from 2014 continues to defy Kernes.

“We pulled Lenin down two weeks after we pitched this,” says Boris Redin, standing beside a large tent in the nation’s blue-and-yellow colours, where volunteers collect donations for the war effort.

Surrounded by sandbags and topped with flags and a sign reading “Vse dlya peremohy” – “All for victory” – Redin says the tent is a tribute and successor to the huge protest camp on Kiev’s Maidan square in winter 2013-14.

“Kernes hates the tent and wants it taken down, and someone tried set fire to it. But it will stay here until all of the Donbas region and Crimea are returned to Ukraine, to remind everyone in Kharkiv what’s going on in our country,” he says.

In front of the tent stand photographs of soldiers killed in Donbas and four people who died in a bomb attack in 2015 in Kharkiv, as well as shrapnel from the type of shells that have claimed many of the 13,000 lives lost in the war.

“I always spoke out against this tent,” Kernes said last month in an interview with Ukrainian publication The Babel. “I said: what’s the point of this tent, if it stands there and reminds people of some war that we don’t hear and we live under peaceful skies.”

By restoring a monument to a Soviet marshal while deriding Ukraine’s present-day defenders and a symbol of Maidan, Kernes enraged opponents but pleased much of his base, which shares his desire for order, stability and a return to good relations with Russia.

While out cycling in Kharkiv, Kernes was shot in the back and partially paralysed

For years a close ally of then president Viktor Yanukovich, Kernes became mayor in 2010 and was re-elected in a landslide in 2015, emerging strengthened from Maidan protests in Kharkiv that were attacked by pro-Moscow demonstrators and thugs bussed in from Russia.

As in Donetsk and Luhansk to the south, “anti-Maidan” protesters in Kharkiv stormed the regional administration building and raised the Russian flag, but their bid to establish a separatist “republic” here ultimately collapsed.

It failed due to a lack of local support and its fate was sealed when Kernes – who was placed under house arrest in March 2014 after seeming to flirt with the separatist movement – publicly backed Ukraine’s new pro-western government after Yanukovich fled to Russia.

The following month, while out cycling in Kharkiv, Kernes was shot in the back and partially paralysed. The gunman has not been caught.

Kernes has used a wheelchair ever since but his hold over this city of 1.4 million has only tightened, as he parlayed Kiev’s fears for the east into apparent immunity from any serious political or legal threats.

“After the annexation of Crimea and conflict in Donbas, Kiev really valued even fragile stability in Kharkiv and went along with the person who said he could deliver it,” says Yevhen Lisichkin of the Kharkiv anti-corruption centre (KAC).

A judge abruptly ended a trial last year in which Kernes and two bodyguards were accused of abducting and assaulting Maidan protesters, and cases of alleged graft swirl around city hall without troubling the mayor, who denies all wrongdoing.

KAC publishes a steady stream of investigations into corruption in Kharkiv, and both Lisichkin and the centre’s chairman Dmytro Bulakh have been beaten up in apparent retaliation for their work.

“They said if I keep sticking my nose into things then we’ll kill you,” Lisichkin recalls of the two men who assaulted him outside his flat in 2017, just a fortnight after Bulakh suffered concussion and broken ribs in a similar incident.

Scores of Ukrainian activists and journalists have been attacked, and several killed, since the revolution, and civil society groups say Kiev has tolerated misrule in eastern and southern cities as long as local bosses prevent major unrest.

Like Kernes, Odessa mayor Hennadiy Trukhanov denies having pro-Russian sympathies and links to organised crime, and the pair founded Doveryai Delam together; it was during the party’s inaugural congress in Kharkiv that protesters toppled Zhukov’s bust in anger at what they saw as a “separatist” gathering.

While polling poorly nationwide the party is set to win several seats in its leaders’ strongholds, but Kernes says he would hand his mandate to an ally and continue to run Kharkiv, where he has swept the field clear of serious opponents.

Polls suggest President Volodymyr Zelenskiy’s Servant of the People party will triumph and bring a huge cohort of new people into parliament, but there are signs that Kernes is already winning concessions from the ascendant force in Kiev.

“The candidates put forward in Kharkiv by Servant of the People don’t look to have much chance of winning,” says Lisichkin.

“You have to wonder why much stronger challengers aren’t standing. It seems that the tacit deal hasn’t changed, and the new authorities are also ready to accept Kernes and his promise of stability in Kharkiv.”