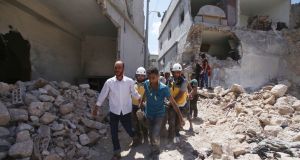 Members of the Syrian Civil Defence (White Helmets) and civilians carry away the wounded following a reported regime air strike on the town of Ariha, in the southern outskirts of Syria’s Idlib province. Photograph: Getty

The battle between Syria’s army and jihadi forces escalated sharply this week in northwestern Idlib province and neighbouring government-held provinces. Syrian and Russian aircraft have stepped up bombardment of Idlib, where three million people live under the rule of al-Qaeda’s Hay’at Tahrir al-Sham.

Villages, towns and strategic locations on the edge of Idlib change hands frequently. Scores of fighters on both sides have been killed and wounded. Syrian opposition groups have reported more than 500 civilians killed, 300,000 displaced and villages devastated and deserted.

The battle for Idlib is a bloody and destructive stalemate. Turkey, determined to topple the Syrian government, supports jihadis and rebels. Russia, the government’s ally, provides air cover for the Syrian army.

Under international pressure to prevent a full-scale government offensive against jihadis and rebels in Idlib last September, Turkey and Russia proclaimed a ceasefire and ordered heavy arms and radicals to be withdrawn from a 15-20km-wide buffer zone on the edge of Idlib. Turkey also increased its deployment of troops in a dozen monitoring positions on the periphery of Idlib.

However, Tahrir al-Sham and its jihadi allies refused to abide by the deal and continued to mount attacks outside Idlib, while Turkey did nothing to halt violations.

There is a bloodless stalemate in the vast Kurdish-held region in the northeast where the Trump administration continues to call the shots and the Syrian army, Iranian paramilitaries and Russia’s air force remain disengaged.

Washington has convinced Britain and France to increase their commitment by 10-15 per cent to replace some US troops who are set to depart. The US will pay. The administration seeks to maintain a western military presence in this region in order to discourage Turkey from invading to eradicate Kurdish forces and block the region’s reversion to government control.

Since Russia intervened in the Syrian conflict, the government has regained most territorial losses and now holds 64 per cent of the country, the US-supported Kurds 27 per cent, and Tahrir al-Sham and its allies 9 per cent. The government has vowed to regain sovereignty over all of Syria but has not recovered any territory since last summer’s army offensive in the south.

Months of political stalemate could end if there are fruitful negotiations on a settlement. Following discussions with UN envoy Geir Pederson in Damascus, Syrian foreign minister Walid Muallem said: “Great progress was made towards an agreement for a committee to discuss a [post-war] constitution.”

This could mean disputes over the composition of the committee may have been resolved. The committee is to comprise 50 members chosen by the government, 50 by the opposition and 50 by Pedersen. Russia has announced high-level talks on Syria will be held early next month in Kazakhstan and pro-government newspaper al-Watan reported the committee could begin work in September.

Once the committee begins functioning, 50 experts will be appointed to draft a new constitution, a transitional administration should be formed and, after the constitution is adopted, elections are to be held.

During this UN-mandated process, one or more of the local parties to the conflict and their regional and international sponsors could prevent progress.

Among the spoilers are the government, the Saudi-backed political opposition, Turkish-supported paramilitaries, and the US-sponsored Kurds. Instead of peace Syria would face continuing conflict and the prospect of being fractured into fiefdoms ruled by jihadi warlords.