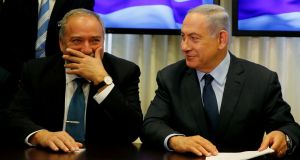 Barring a last-minute compromise ahead of a midnight Wednesday deadline, Israel will be holding new elections in September, as prime minister Binyamin Netanyahu has failed to cobble together a coalition following his election victory in April.

Parties representing 65 members of the 120-member new Knesset parliament recommended to President Reuven Rivlin that Mr Netanyahu form the next government but Yisrael Beiteinu, headed by Avigdor Lieberman, refused to join the coalition because of differences over drafting the ultra-Orthodox into the military.

Under such a scenario, the president has the option of asking another Knesset member to form a government but Mr Netanyahu worked quickly to block such an option by rushing through legislation to dissolve the Knesset, ensuring a snap election. The first reading passed on Monday night and the second and third readings are scheduled for Wednesday.

The ultra-Orthodox, a powerful force in Israeli politics who have been part of almost every coalition, enjoy an almost total exemption from army service, compulsory for 18-year-old Israeli men, who must serve for three years.

Recently, Israel’s high court ruled that the ultra-Orthodox exemption was discriminatory and illegal, prompting Mr Lieberman, when he served as defence minister in the outgoing government, to introduce a Bill extending the draft to most ultra-Orthodox men.

Mr Lieberman, who relies heavily on votes from secular, Russian-speakers, insisted during the coalition talks that the Bill become law as is, rejecting amendments agreed to in the negotiations between Mr Netanyahu and the two main ultra-Orthodox parties, United Torah Judaism and Shas, which together won 16 seats.

Usually, creative wording can overcome such differences but Mr Lieberman, whose election slogan was “Right-wing and Secular”, refused to budge, accusing Mr Netanyahu of caving in to religious coercion.

A last-minute compromise is still possible and contacts were continuing on Tuesday night, as the deadline loomed.

An indication that a snap election was the most likely option was the move on Tuesday night by Mr Netanyahu to merge his Likud party with the moderate right-wing Kulanu party led by outgoing finance minister Moshe Kahlon, which won four seats in the new Knesset. Mr Netanyahu also blocked a Likud primary contest ahead of a possible September election.

September elections could torpedo Mr Netanyahu’s plan to promote legislation that would guarantee him immunity from prosecution while in office. In February, the attorney general announced plans to indict him on charges of bribery, fraud and breach of trust.

New elections would also place a huge question mark over the much-delayed US Middle East peace plan, which was supposed to be unveiled next month after the government was formed.

The Trump administration was reluctant to launch the plan during an Israeli election campaign but delaying Mr Trump’s touted “deal of the century” by another six months would mean presenting it as the US enters its primaries season.